Decks and Porches
Homebuilders
Garage and Shed Building
Roofing
Fencing
Pavers and Hardscaping
Pressure Washing
Deck Maintenance
Licensing
No License Required for Trade
Bonded
Insured
All statements concerning insurance, licenses, and bonds are informational only, and are self-reported. Since insurance, licenses and bonds can expire and can be cancelled, homeowners should always check such information for themselves. To find more licensing information for your state, visit our Find Licensing Requirements page.
Business Details 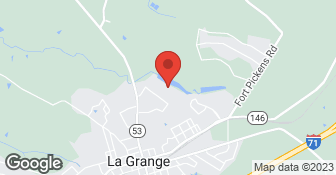 I've been in the building business for over 49 years and I specialize in decks. I have many pictures of previous completed projects as well as local references that I'd like to share. Consulting for DIY's....

M&N Fabrication is a fully licensed and insured company dedicated to craftsmanship. We do everything from remodeling to custom furniture and can help you design your dream. If you have a unique project and don't know who to call, please don't hesitate to ask. We look forward to your business.

As previously stated, he never followed up on giving me an estimate for the deck I was wanting. After several phone calls placed to him by myself, and him not following up, I gave up on making any further contact with this contractor for the project. I got in contact with several other contractors and got what I needed from them. I've seen Donn's Decks ad in the Oldham Era for years, and saw that ...

DESCRIPTION OF WORK
Provider didn't provide! I contacted him and left a voicemail, then he got back to me and I told him about my proposed deck project. We agreed to make contact again a few days later and schedule for an estimate to be done. After scheduling for the estimate, I never heard from him, nor did anyone show up. I called after not hearing any further for a few days, and was told he had been feeling bad and not able to work. I relayed my schedule of availability to him, again so I could get a cost proposal from him, and never again heard from him.

We had contacted Don on January 9th to schedule a estimate on how much a new deck would cost. He said to give him a couple of days and he would get back to us to schedule the appointment. Well needless to say he never called us back and we attempted to contact him another time. Don never got back to us. I don't know how companies can run like that and not get back to you, that just isn't good busi...

Donn was really nice to work with. He did a very good job and one can tell that he really takes pride in the work he does. I would definitely use Donn in the future.

DESCRIPTION OF WORK
Donn rebuilt a new deck and removed the old one that collapsed.