Plumbing
Drain Cleaning
Kitchen and Bath Remodeling
Sunrooms and Patio Enclosures
Interior Painting
Glass Block
Ceiling Fans
Finished Carpentry and Woodworking
Pressure Washing
Heating and Air Conditioning
Flooring Sales and Installation
Electrical
Drywall
Countertops and Backsplashes
Licensing
All statements concerning insurance, licenses, and bonds are informational only, and are self-reported. Since insurance, licenses and bonds can expire and can be cancelled, homeowners should always check such information for themselves. To find more licensing information for your state, visit our Find Licensing Requirements page.
Business Details 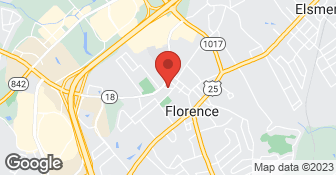 One Hour Heating and Air Conditioning

One Hour Heating & Air Conditioning provides high-quality residential HVAC services to our Cincinnati neighbors. Whether you need routine maintenance, emergency repairs, or a full system install, you can trust our team of highly-trained technicians, available 24/7, to take care of you and your home. Our trucks are stocked and ready for same-day repairs and our work is backed by a 100% Satisfaction Guarantee. Ready to cross this off your list? Call us today.

2 service call visits and it still wasnt fixed. They were polite on phone but their services were not effective. They were talking about drilling and concrete. That was not necessary to fix the problem. I noticed in other reviews that they stress they are a Christian based family, I am a Christian also. I felt like I was being taken advantage of, especially when I hired another plumber that fixed ...

Unfortunately, I have to change my 5-star review. We had this company out on June 27th (3 days ago) to clear a clog in our main line, they were very nice and knowledgeable and seemed to do a good job. While they were here they ran their snake one time before it came unhinged and they had to manually pull it out. I would have liked it ran few a few times to make sure the line was unclogged but the ...

Awful. They took forever to set something up. When they finally told me they could come out they never told me anything about what they planned on doing to fix the problem. I thought they might lengthen the drainage pipe in our front yard but instead when I got home from work they were tearing up my small back yard and rerouting the pipe there. I repeatedly asked if having the pipe in the back was...

DESCRIPTION OF WORK
They came to check out why we had a huge patch of ice accumulating in front of our home in the winter. Said our house may be taking in liquid from the neighboring yard and that they would come back when it was warmer to work on the project. Never said what they proposed to do to fix the problem though. Ultimately they put our drainage pipe in our back yard instead of the front.

It didn't go.  Still waiting on my phone call.

DESCRIPTION OF WORK
I called on Monday morning and spoke with a nice lady to schedule an appointment for an estimate.  The lady told me that she could have someone there at 3:30 pm to look at what I needed done.  I took off work early to make sure that I was there to meet this person at the door.  3:30 came and went.  I called at 3.40 to make sure I was still on the books and spoke with a guy who informed me that the secretary was out of the office and that things are kind of hectic when she isn't around.  I let him know I had a 3:30 appointment and was checking to see when someone was going to be here.  He told me to give him my number and that he would call me back shortly.  Well 4:00 came and still no phone call so I called back and spoke with another guy.  I went through the whole thing again as I stated earlier and he told me the same thing about when the secretary is out things are hectic.  I explained to him what I needed for and he told me that he would give my name and number to another fellow who would call me back.  Well 2 days later I am still waiting on that phone call.  Maybe it will come someday.

I've used them before. It was very good. It took several hours to complete the job. Everything has been working well since.

DESCRIPTION OF WORK
Replaced a pipe that had frozen and burst.