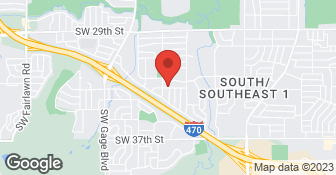 Gray Wolf Plumbing is a family owned company with over 40 years experience. We are proud to provide a wide range of plumbing services both commercial (new construction, remodel and service) and residential (new construction, remodel and service). We are happy to provide you with a free estimate. We accept check, debit, visa and mastercard payments. Gray Wolf Plumbing is fully licensed, bonded and insured. Please call our office at 785. 215.6303 for more information.

24/7 Plumbing Emergency Services are Available: We are a small family owned and operated plumbing company out of Topeka, Kansas. We are here to provide the highest quality service at honest, smart, and affordable prices to our customers. Being a home owner we understand the responsibilities and cost of even the smallest repairs. We treat every customer as a part of the family and will not recommend anything we would not do for ourselves.

I started Busy Bee Heating and Cooling to offer a alternative type of Residential service to customers, I am a Big believer in preventive maintenance and changing filters. I also work different hours then most since I work full time for the local school district. I am trying to build my company up to provide for my family and make a good Company for my kids to learn a great trade that is needed for comfort of my local residence’s.

The man fixed the toilet for a low price and this March did the repair work needed at less than half the price the other plumbers' bid. In addition did a very good job. I highly recommend his company.

Bob knew exactly what needed to be fixed after describing the problem over the phone. He showed up promptly and had the valve replaced within minutes of arriving. Bob has also done heating/cooling work for us in the past and has always provided A+ service!!! Honest and trustworthy I would not hesitate to have him work in my home even if I was not able to be home during the repair. I highly recomme...

DESCRIPTION OF WORK
Bob just stopped by to check fan on furnace. By the time he arrived the fan had shut off, so all he did was look at it, it was functioning ok, so he left.

Mr Rowland fixed it for a low price but then stayed to see if it worked correctly. There was still a slow leak because the old toilet was bad. He suggested buying a new one for a low price at Lowes. He drove out to Lowes and helped me pick one up and then brought it back with me. He then installed it and didn't charge me a penny for all of the work he had done on the original repair. To top it off...

DESCRIPTION OF WORK
Called to have my toilet repaired. It was an old toilet and had given me trouble for years. No prior plumber had ever fixed it correctly.

Robert Rowland was on time, very affordable, polite and knowledgeable. He is a licensed mechanical contractor and handles heating and air conditioning issues, as well as plumbing. I recommend him highly and will call him in the future.

DESCRIPTION OF WORK
My garbage disposal unit began leaking under the sink. I searched on Angie's list and found the listing for Rowland & Company. When I called Robert Rowland he offered to come the same day, which he did. I had already bought a replacement disposal in case I needed it. Robert was happy to install it and told me exactly what it would cost. He completed the work in about 45 minutes. I offered to pay him by check but he said his accountant would send me an invoice in a few days.