A+ For Davey's Tree Service

Tree Service
Mulch and Topsoil
Landscaping
Licensing
No License Required for Trade
Bonded
Insured
All statements concerning insurance, licenses, and bonds are informational only, and are self-reported. Since insurance, licenses and bonds can expire and can be cancelled, homeowners should always check such information for themselves. To find more licensing information for your state, visit our Find Licensing Requirements page.
Business Details 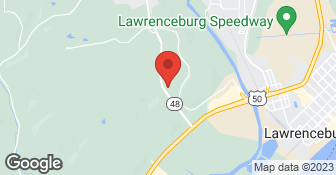 As an experienced business in landscaping, we look to provide the best and most exceptional services that there is to offer! We specialize in anything from retaining walls to sod installation to home and sidewalk/driveway washing. Contact us today for all your landscaping needs!

The the original bids, etc... were done over the phone.  I saw him in the truck with one other person and one chain saw.... I should have let him know I didn't need/want his services then and there.  But I needed to have a tree down in time for the plumbers to come as my water lines had been destroyed by tree roots.  I was in major crunch time...and he took advantage of that.  Stupid me gave him a...

DESCRIPTION OF WORK
Basically he ripped me off.  He actually gave the impression that he was an employee of THE Davey Tree Service.  He told me his office manager would not have the paperwork ready so I would have to accept a hand written contract agreement - Over the top of the  contract he had written the words "Dave Tree Service"  I should have known it was a scam when I saw him.  The bid amount was to cover the tree that had to come down - as well as other work.

Very professional overall, and the work was delivered exactly as promised. There were some scary moments (for me, not them), as I watched their tree guy hanging several stories off the ground, but in the end there was no property damage, they had everything under control, and it was clear they were experienced and knew exactly what they were doing. I would definitely hire them again the next time ...

DESCRIPTION OF WORK
Removed one giant tree and trimmed and cut a whole bunch of other trees on the property.

They worked carefully, lowering tree sections with ropes to prevent damage to the grass and shrubs below. Removed all of the tree and parts of trees that they had cut down and raked up the area. Removed the stump and left the area ready for me to sow grass seed.

DESCRIPTION OF WORK
Removed one ash tree a few feet from my house that had been dropping branches on the roof. Removed dead limbs from several very tall ash trees near my house.