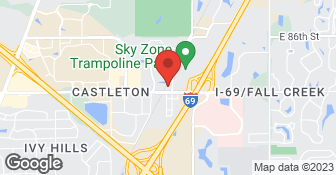 I have been going here since 2003. I knew they required a fecal float test and bordatella, which I had done when my dog had her annual exam last November. When I made the appointment they just said her records weren't current, so I brought them with me. When I arrived with my dog, Kyle looked at the records, threw them in the air and said "I told you they weren't current". He said it was their req...

He loves it! He knows when he is going here and he goes crazy.  They ensure the big dogs play together and the small dogs play together. It's really convenient -- you just show up in the morning and they take him in. You don't need an appointment. They have a half day rate, special events, and so forth.

DESCRIPTION OF WORK
I take my Yorkie-Poo/MinPin mix here for doggie daycare. He got playtime. I've been using them since Oct. 2014.

You can view the dogs online via internet when they are outside.  We saw there was one attendant on duty outside with approximately 15-20 dogs.  I was surprised to see other dogs being allowed to try relations with other dogs without any concern as to the possible consequences.  However, that is not my complaint.  The biggest issue was the fact our dog came home with a tick on the top of his head,...

DESCRIPTION OF WORK
Best Friends provided boarding for our dog between October 4 through October 14, 2013.  This included the kennel, food, bath, nails trimmed and allowing the dog to run around in a fenced in yard area with other dogs.

When I made the telephone reservation to board my two dogs, I specifically told the staff member that I could not afford to board the dogs for the entire weekend - only for one night. When I dropped the dogs off on Saturday, I was told I could pick them up on Sunday and that the facility was open between 3:00 and 6:00 p.m. I agreed to do so. Fifteen minutes after I left, I was told that my cattle ...

DESCRIPTION OF WORK
I had two dogs boarded for one night, from Saturday, April 27th until Sunday, April 28th, 2013.

I have contacted Best Friends three times now.   First time - I went in to get information about training.  After standing in the lobby for 20 minutes, I left. Second time - Called about training.  It took 3 days to get a call back.   Third time - I have never called when a person actually answered the phone.  I called three times on this day about grooming and on the third time left a message.  T...

DESCRIPTION OF WORK
No service was performed.  I have never been able to actually purchase services from them.

General Information
Bonded
No
Insured
Yes
Free Estimates
No
Payment Options
Visa, MasterCard, American Express, Discover
Senior Discount
NO
Emergency Service
No
Warranties
Ask for details
All statements concerning insurance, licenses, and bonds are informational only, and are self-reported. Since insurance, licenses and bonds can expire and can be cancelled, homeowners should always check such information for themselves. To find more licensing information for your state, visit our Find Licensing Requirements page.