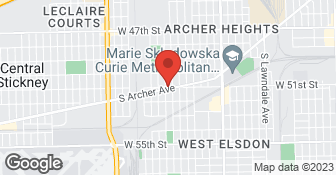 ET Locksmith is a locally owned Chicago company with many years of experience. Our professionally trained technicians provide the most comprehensive security and locksmith services for your residential, commercial, and automotive needs in the Chicago land area. We are licensed, bonded and insured and equipped with the latest models and largest selection of locks and security systems on the market today. We provide fast and reliable services that you can count on. ET Locksmith services customers 24/7, 365 days a year. When it comes to speed, and quality service, no one does it better than ET Locksmith.

Quick key Locksmith works within the Chicago and West Chicagoland area to provide variety of locksmith services such as lockouts, lock installation, lock changing, car keys, and re-keying. We service all brands of locks, safes and keys, even those we don't sell. Our professional locksmiths are more than capable of handling your locksmith services, no matter if it's simple, complicated or even in emergency. Our professional team of locksmiths will handle all locksmith issues and emergency problems with quality, fast and affordable service. We even offer a 10% discount for all new movers.

Lost the one and only car key to my 2010 Toyota which was locked. I spoke with Jose and he said he would be out at a specified time. He got there early, sent me a text, I met him there and the job was done perfectly within 20 minutes. I had keys (and extras) and was back in my car. I can't thank Jose enough! I would highly recommend him!!!

DESCRIPTION OF WORK
Replaced lost Toyota car keys with chip. Toyota dealership said that they couldn't help. Had no keys.

I was packing up to move out of my apartment, and after a morning of packing boxes and thowing out garbage, I realized I had lost my only set of car keys. I looked everywhere, but I couldn't be sure I had packed them or thrown them out, and I had so many errands to run than I decided to call a locksmith. I started by calling my car dealership, but they wanted me to tow the vehicle to them to get a...

DESCRIPTION OF WORK
I lost my only set of car keys and within an hour of my call, Omega drove to my house and made me new car keys on the spot.

I lost my last car key and called Omega based on a review from Yelp. My car was a little obscure because the key has an electronic chip in it that must be matched in any copy. Omega was cheaper than the other company I called, came right out to my house, and did not stop working at it until he got the job done. I could see what a pain it was to match the chip to my car - the locksmith had to go ba...

DESCRIPTION OF WORK
Replacement of car key. The key was lost, so the company had to come out to my house and fit a new one.

Omega was right on time, and because of my car model had to put in a lot more time getting the key code then they had anticipated. They already had the lowest price quote I found, and did not raise it despite the fact that they had to go back to their shop and spend an hour getting my car's specific chip. Very good, friendly, responsible service. I will certainly use them next time I need any key ...

DESCRIPTION OF WORK
Omega came out to retrofit a car key for me - I lost my only key. The key has an electronic security chip, so it turned out to be somewhat difficult.