Not Rated| 5 Reviews
Request a Quote 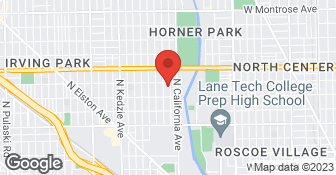 When your P.C. , Tablet or Cell Phone has you stumped you need an American based tech team on speed dial: Call Now: 877-378-9258. Remote, online, and In home support from the good old USA. In need of a performance improving tune-up? Have a virus or spyware issue? We have you covered. Have questions about a program, your printer, importing photos, working with websites, working with your computer, or just needing advice on what to buy? My Computer Works membership gives you go to access to the IT support you need, a data-back up solution second to none, and training all in one place.

We are a Chicago Based QUALITY Modern Architecture Firm. We take all types of projects, from the smallest home to the largest commercial project. We Offer Free Estimates. We are easy to talk to, fun to work with and FULLY DEDICATED to your SATISFACTION. Feel free to contact us if you have an architecture question or want to learn more about our services. We want to help you make your project become reality. We want to be your Architect.

We found Pete on yelp, there were a lot of good reviews and a few bad ones that said he's not very professional. However, Pete is well priced so we decided to give him a shot. HUGE MISTAKE. Pete seemed professional and prompt at first. He showed up, told us we were being scammed by the big box company (who had given us an ~4k estimate) and that he could to the work, labor and materials for around ...

DESCRIPTION OF WORK
He was hired to rewire an old 2 flat in Chicago. The work consisted of separating the electricity of the two unit into separate boxes. Replacing old bx with conduit and bring the building up to code.

Very responsible, professional and took the time (when he didn't necessarily have to) to teach/educate me about the basics of electrical repair. Worth the price and would use him again and plan to in the coming months.

DESCRIPTION OF WORK
Had new switch placed in basement and set up three way switch as well. Removed live/exposed wires for us. He also set up 2 cable outlets and phone line in our office area.

I called Bohlen Electric for a quote on some electrical updates I need for my home. He showed up within the hour of our appointment. I took him throughout the house showing him the updates needed. This process went fine. He gave some advice and let me know that I would be receiving a quote. I never received this quote, even after following up with both a phone call and an email.

I did send you out an estimate via e-mail. Did you check your spam folder? And my apologies for not following up with you better. Something I have strived to change in the last year. Good luck to you.
A

I lived in Los Angeles and was moving to Chicago. I had purchased a condo in Old Town and was attempting to do a remodel from LA. this was a harrowing experience, let me tell you!!!! However, i found Pete on "yelp", and that was one of my best decisions throughout the whole remodel experience. I initially sent him a HUGE, laundry list of questions on what i wanted done to my unit. he patiently ans...

DESCRIPTION OF WORK
Changing out all switchplates in my 1500 sf condo to dimmers. Rewiring and rerouting of a lot of of outlets and switch plates due to remodeling, bringing power and cable in for plasma/cable/electrical fireplace, installing undercabinet lighting, installing new bathroom fixtures, ceiling fan, bedroom fixture, and hanging 2 plasma tv's and handling the wiring.

They are a good, reliable company with an unbeatable price. They were very professional and the estimate was right on target with what the final cost ended up being.