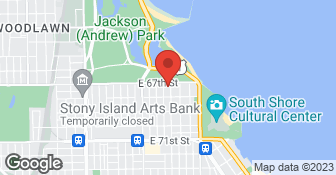 OWNER-OPERATED. COST IS BASED ON TIME AND MATERIALS. TRAVEL CHARGES MAY APPLY OUTSIDE CERTAIN RANGE....

DESCRIPTION OF WORK
Perkins was hired to fix original 1906 windows that were, he said, "in the best condition I have ever seen". He arrived an hour late on the first day (2:00) and although I heard a lot of pounding, he accomplished nothing in the four hours that he "worked" except to PURPOSELY knock out large chunks of putty around the window panes (I had to hire someone else to repair this damage because this is not in his expertise). In addition, when he took apart two windows, he caused considerable paint damage because he did not know enough to use a mate knife to cut the wooden connecting seams. The following day he did the work he was supposed to do the day before. He arrived at 2:00 in the afternoon and finished the work at 8:00. The big, unnecessary (and costly) mess he makes is left to the client to clean up.

Getting the work scheduled took months. Art works alone and tends to keep late hours and he likes to talk. But if you have old windows that you want restored to look like they did a hundred years ago, this is the guy. The workmanship is impeccable. Old, jammed up windows are now tight, move smoothly (using just one finger) and look beautiful. Like having high quality furniture. The eccentricities ...

UPHOLSTERY, FURNITURE REFINISHING THAT IS NOT ON SITE.

General Information
Bonded
No
Insured
No
Free Estimates
Yes
Payment Options
Check
Senior Discount
Ask for details
Emergency Service
No
Warranties
Yes
All statements concerning insurance, licenses, and bonds are informational only, and are self-reported. Since insurance, licenses and bonds can expire and can be cancelled, homeowners should always check such information for themselves. To find more licensing information for your state, visit our Find Licensing Requirements page.