Handyman Services
Electrical
Concrete Pouring and Repair
Drain Cleaning
Sewer Cleaning
Kitchen and Bath Remodeling
Water Filtration and Softening
Water Heaters
Water and Smoke Damage
Licensing
Bonded
Insured
All statements concerning insurance, licenses, and bonds are informational only, and are self-reported. Since insurance, licenses and bonds can expire and can be cancelled, homeowners should always check such information for themselves. To find more licensing information for your state, visit our Find Licensing Requirements page.
Business Details 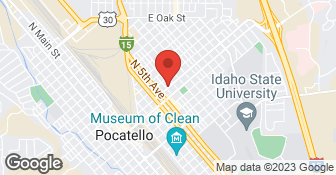 Re-Bath is the Nation's Largest Bathroom Remodeler. Since 1978, we have continued to offer customers only the best bathroom remodeling experience. Whether it's a Tub/Shower Update, Aging and Accessibility Solutions, or Complete Bathroom Remodeling, it starts with Re-Bath.

As stated above, he did not start until two days after the agreed upon start date. On the day he did start, he arrived several hours later than stated. He tore out all of the old ceramic tiling of the counter and back splash and removed the old cabinetry. I was later to learn that none of that needed to be done so early in the job as there was a five week wait for the special order cabinets to arr...

DESCRIPTION OF WORK
Herman and his team commenced tearing out our lower kitchen cabinets and counter top on the 24th of April. This was 2 days later than originally planned. New plywood walls were put in to prepare for new cabinets and counter top. Some re-arranging of plumping pipes was also done while the walls were open. He also sold us a sink, which he told us was cast iron. It is not. He will not take the sink back.

This review is very misleading. We took this job for about $3000.00. The customer ordered all cabinets, countertops, flooring, etc. from a big box store. We did not supply anything but a sink. She was running out of money and we told her we had purchased a sink for my mother-in-law on a clearance sale from a plumbing supply store. We offered it to her at cost. We took out and showed her and she ap...
A

Fantastic job, very quick and excellent work.  Even followed up to make sure inspection was done and passed.

DESCRIPTION OF WORK
I called them out for a 2nd time (1st was over a year before for a leak under my sink).  He was about a 1/2 hr later then he said but still better then others in the area.  He had to replace my water heater for me.  It had gone out and I needed one right away.  He replaced it, put everything to code and even arranged the inspection and it passed.  I have never had anything but great service from this company.  The other reviews sound like people who didn't want to pay or thought plumbers were handymen.  He is very skilled and very thourough.  I could not have found a better plumber to rely on when ever I need one.

Herman Govan, owner of Triple A Plumbing, tore up our property without our consent then he promised to fix it back up again but he never did. He tore up the place and just left it as is and didn't finish the job and we had to do fix all the repairs that he did at our own expense. Then later we discovered that Heman Govan is a registered s** offender in Bannock County, Idaho. If we knew that, we ne...

DESCRIPTION OF WORK
Herman Govan, owner of Triple A Plumbing, tore up our property without our consent then he promised to fix it back up again but he never did. He tore up the place and just left it as is and didn't finish the job and we had to fix all the repairs that he did at our own expense. Then later we discovered that Herman Govan is a registered s** offender in Bannock County, Idaho. If we knew that, we never would have hired him. Never do business with Herman Govan from Triple A Plumbing. He is definitely a con artist and will definitely cheat you.

It was totally awful hes a true con artist thats done this before and is in court all the time. The day I took him to court he was already their in a preceding before mine. Just no good at all. AVOID TRIPLE A PLUMBING AND HERMAN GOVAN HE WILL STOP AT NOTHING TO RIP YOU OFF.

DESCRIPTION OF WORK
Triple A plumbing was hired buy me and my sister to redo an old downstairs bathroom By putting in the Shower,Toilet and Sink then a one piece floor and then drywall and paint with just the other little thinga like hook up a fan light etc. so the started and first off they had to dig up a section of the cement floor and fix the pipes. They did this with a jack hammer and sledges with breaking bars. they didn't hang any plastic or dividers up to control all the cement dust. so when we got back that evening the entire inside of the house was filled with a thick dust and their was a thick cover of dust on everything, that was cleaned by me they refused to clean up the mess. And that took me four days to clean dust sweep and mop & clean floors.then they started to do the Framing and sheetrock and put the hot & cold lines in and cut the hole for the shower. All this junk & garbage pieces of wood, pipes chunks of cement etc. was all put in the next room and left. I asked "Herman Govan" to clean it up, it was piling up. He said that was my job. and I told him do clean it That was part of the contract. So like the true "pro" that he is, He refused to do it and Made his wife and kids come over and do it, Then him and his buddy all went home leaving the wife and kids to do all the work. My sister gave him Two payments of 1,200+, and then one of 800+, He bid the job for 2,600. And we gave him a little over 3,300. The walls are all down nothing was connected and no supplies were bought the ceiling was also left tore up and no floor was put down and the toilet sink shower were not attached or hooked up. It was left a total mess. Then after all of this My sister passed away On may 16 of 2009 and that monday when "Herman Govan Owner opperator of Triple A plumbing" read the obituary in the paper He went straight down to the court house and put a lein on the house for 5,000. In the contract There is a stipulation that he did the work for a reduced rate for my sister and if she was ever able to come up with the money for the regular rate it would then be rembursed to him. But she's gone and of course will never be able to come up with the money to do that, the house is mine now, I didn't sign any contract but the lien is still there and do you know what all kinds of crap that causes a person when you need to change the names ownership of house bank payments etc. etc. So I took him to court and sued him to either give the money back or finish. I showed Judge Evans 6th District court judge the photos and the contract and he still didn't find in my favor. You see when Herman Govan showed up to court He had his wife & kids all with him so neat and clean just like going to church, and then he pulled out the Race card and insinuated that becouse he's black that's why I was sueing him And that I guess scared Judge Evans,so that was about it. He totally lied right through court.I know its sounds unbeliveable but just contact me and I'll show the proof.208 403 1713.

all plumbing new installations and repairs

we do not provide electrical services or concrete separate from restorations after repairs. For these services we bring in contractors who specialize and are licensed for this work.