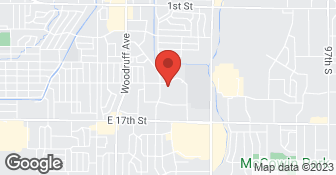 I called this company to find out if they sprayed fruit trees to keep them from bearing fruit. They told me yes, but the service had to be performed just as the trees were blooming. I told them I had 3 apple trees in my backyard I wanted sprayed, they told me they would keep an eye on them and call me when it was time. I called them 2 more times to verify they had my address correct and they were ...

DESCRIPTION OF WORK
NOTHING

He was on time and did very good work on the hornests and wasps that I had. And he also gave me some very good advise on my lawn that I damage. I have hornet and wasp nests under my front poarch and he sprayed and killed a lot of bee's. He also used a spray that was good for the enviorment and will not harm animals. He did a very good job and I will use them again.

DESCRIPTION OF WORK
I have been having a problem with hornests and wasps under my poarch, which is sealed in, he spray in and under and all around the poarch, we could not pull up any of the boards on the poarch because we did not have the correct drill bite, but he sprayed and killed a lot of bee's. What I also liked was the spray he used was not harmful to the enviorment. I also did some damage to my lawn and he gave me some very good advise on what to do with my lawn to help it.

It was great. We had an issue with some spiders. He came out and sprayed. About two months later, they showed up again. He said that if they ever showed up, he would give a free spray.

DESCRIPTION OF WORK
They provide pest control services for me.