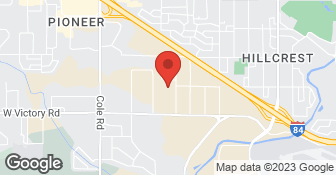 We provide roofing services from residential to commercial....

Specializing in Roofing, Siding, and Gutters. We have the experience and dedication to bring your dreams to reality! We guarantee your satisfaction, and we won’t leave until the job is done right. Call or click to schedule a free estimate today!

In business since 1998 in Idaho. We are an exterior remodeling company.

We making protecting your home an easy choice! We install quality roofing systems without cutting corners. Our great prices match our reliable work, GUARANTEED. Call or click to schedule a free estimate today!

After a really bad roof replacement job, I've called in Dotson Roofing to correct the obvious leaks. (Nothing like a good rain to finally discover how good a job it was). Dotson's estimates were accurate, the work was performed in a very professional manner, even replacing substandard materials and techniques that were used in the original job. Over the years I've had to call in Dotson three times...

Did a crappy job. WE didn't inspect the work when they were finished, but the people buying our house had a home inspection done and found that the repair was terrible. There was still roofing felt exposed in placed (right next to new shakes that had been installed), and in another spot they put a ton of staples into a broken up shake. When confronted, they admitted they hadn't inspected their wor...

The estimate was competitive but slightly higher than the best bid, and did not include metal valleys in the medium priced shingle which was the deciding factor  when I selected another company.

Excellent. On time and professional.

The bidding process was more than satisfactory. Any time I had a question, I called Dotson Roofing and I either talked to Kimberly or left a message with the answering service. They were highly responsive to my concerns and questions.

DESCRIPTION OF WORK
I asked Dotson to bid on reshingling our roof. Jerry came out within an hour of my calling and asking for an estimate. Though I ultimately gave the job to another company (it came down to price), I really appreciated Dotson's excellent responsiveness to phone calls and the fact that when Jerry give me a bid, he told me that he took the cover off our dryer vent and cleaned it out as far down as he could reach. That was unexpected and really appreciated, as I told him that I thought our vent was clogged.