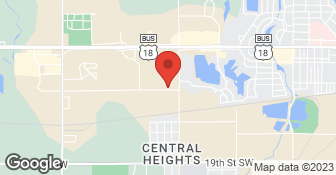 Complete Auto Repair is proud to be a locally owned and operated business in Mason City, Iowa that can service foreign and domestic cars including your regular service interval maintenance, general repairs and much more! We are an ASE certified facility and we value each of our customers and deliver quality service on every visit. If you would like to know more about how we can get you back on the road, please call Complete Auto Repair today!...

After we received his diagnosis and cost estimate. We needed to think about the hefty repair. We decided to get a second opinion and sent a tow truck to get the car. We were told that we could get have the tow truck come an pick up the car. When the tow truck arrived he was told he could not take it due to the unpaid bill and was sent home. This was when we found out the money owed from the tow tr...

I was able to get in right away; they dignosed my vehicle quickly; the part took awhile to get in and they were busy but I have had no issues since with my vehicle acting up!

He was true to his word, he gave me an honest estimate, and he's very skilled. I will always use him.

Randy was thorough in his explanation of what needed to be done and why. He listed out the parts that needed to be replaced and what the costs were. He explained he was trying to get the best deal, but quoted me the more likely price situation. We were able to drop the car off the night before using Randy's nite-drop off key slot. Then were able to pick up the repaired car the next day as promised...

DESCRIPTION OF WORK
Randy and crew diagnosed a problem with my '98 Caddy's suspension. Some bushings in the rear suspension were causing a noise and rough ride.