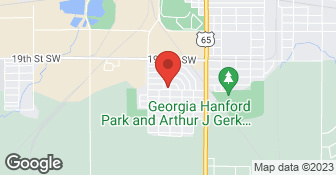 We use them all the time, and their service is very good. The gentleman who does the work is very friendly, and after the work is done we don’t have any pest problems, so it was done correctly.

DESCRIPTION OF WORK
We use American Pest Control for our pest control services.

It did not go as the technician was extremely rude. Will never call them again nor will I recommend them to anyone. False advertising and unprofessional.

DESCRIPTION OF WORK
Advertisement in local phone book stated that company services Southern MN and Northern IA since 1975. Called local office and spoke to gal who was very friendly. She took my contact information and stated that she would forward my information on to technician named Brian and have him call me. A couple of minutes later, Brian called. I proceeded to explain to him that I was experiencing a mouse problem and would like to know what their company had to offer and a general price range. He then asked me if he knew me. I answered No. He then asked where I lived and I told him St. Ansgar. He then proceeded to tell me in a rude tone that they only service Austin, Albert Lea, and Mason City. I thought that was strange as ad states Northern IA, and I am located between Mason City and Austin. But, okay so they do not service my area. I asked if he could recommend or advise of a company that serviced my area. He then abruptly stated No, that it was Saturday and his weekend off. Okay, so I understand it was Saturday early afternoon. But if they did not service my area, then why does the ad say it does, why did the lady in the office forward my information, and why did he call. Besides that, he was so terribly rude, that I would never recommend using him for any of their services. It would have been nicer had he been polite and friendly like the lady in the office.