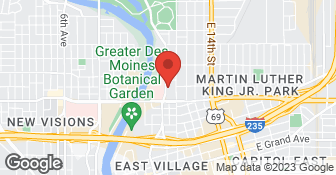 Dr. Vittetoe ordered X-rays and gave me a cortisone injection for the pain. When the pain persisted, several weeks later he ordered an MRI exam which identified the problem as a touch fof good old-fashioned age-related arthritis. While I am not overjoyed at getting older and the problems that come with it, I'm feeling much better now and was certinaly happy to learn the problem is not as severe as...

DESCRIPTION OF WORK
I had excruciating pain in my right hip and upper thigh which I attributed to possible bursitis and too much spin class (repetitive motion).

The incision from the operation did not heal along its whole length for several months. Part of it became infected. Dr. Vittitoe never expressed any concern about this pattern; he didn't provide any context about why this would be happening, or suggest steps to take to speed up healing. The incision finally closed fully after about 8 months. After the operation I experienced constant muscle pain, ...

I went in for a consultation with Dr. Vittetoe to discover if this was needed or not and to discuss past issues with knee. After a brief discussion, I asked what knee replacement product he would recommend, and he stated it was not that easy and that he had to meet with his team to determine the specific knee replacement that would be recommended. At first I was a little concerned that he could no...

DESCRIPTION OF WORK
I had a total knee replacement and Dr. Vittetoe did a great job. Hopefully I won't need the other one done, but if I did I would go back. When my wife was in the waiting room she said there were several of his patients that had had new knees and hips, they were talking about how great they were doing, which put her at ease.