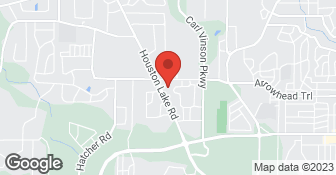 OUTSTANDING!!!  This is the second time we've used Meadows Garage Door.  We called today at 9AM, service arrived within 2 hours and job was complete within an hour.  We've used other garage services in the past and Meadows is by far the best--responsive, fair pricing, honest, and pleasant.  None better.  I

DESCRIPTION OF WORK
Replaced one roller on garage door and stabilized runner attachment to frame of garage.

I called Mr. Meadows with my problem and he arrived within 30 munutes to repair. I can't tell you what a joy it was to have such a friendly and competent person come and fix the door.  I also called about two weeks later for another repair involving the motor, he gave a free estimate and later replaced it for much less than competitors.  Try Meadows out; you'll be glad you did. I've tried others a...

DESCRIPTION OF WORK
The arm on my garage door that attaches to the chain driven motor had pulled away from the door.

I contacted him via phone(I live in germany) to get a phone estimate, he was very professional, he went to the house and gave me an estimate for the garage door and called me back when he said he was going to.  He had the door and parts that were needed and return to the house with in a few days to replace the door.  I was very pleased.  My dad was there to pay him and while he worked on the door ...

Randy and his helper arrived on schedule and removed the old door and lift.  The new door was assembled and installed into the new tracks/support system.  A belt-drive Liftmaster motor was installed to raise and lower the door.  The system was tested and lubricated.   Th new door and lift are very quiet while in operation.

DESCRIPTION OF WORK
Randy removed and replaced my 16 foot wide garage door and the motorized lift system.  Included was all new hardware, track, and springs.   The door was an upgrade from the old in that it is a two inch think, double skin with foam core.   A weather seal was also installed.