A Rated | 10 Reviews
Request a Quote 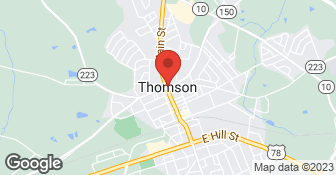 Pool Heating and Air is a fully licensed, insured, and bonded company specializing in HVAC and refrigeration. We are a Mitsubishi Diamond contractor for installation of mini-split heap pumps. All work is performed to state and local codes. We have 24 hr. repair service for commercial and residential customers. We accept Checks, Cash, Master Card and Visa. We offer flexible financing....

The technician arrived promptly after I placed the initial call, was professional, and very efficient. On top of that I was only charged the price of a service call. I have dealt with Anthony Pool and Pool Heating and Air, Inc. for many years and have never received anything less than economical, prompt, and professional service.

DESCRIPTION OF WORK
Heating system was not acting as it should have been. I called at about 8 a.m. and a tech was at my house soon after 9 a.m. He tested the system and found the flame sensor had some carbon buildup on it. He cleaned the carbon off, replaced the sensor and tested the system. It worked good several times.

Their installers did a poor job about running the ducts they had to come back and do it again and they had to send a second group of installers back.

DESCRIPTION OF WORK
I use Pool Heating & Air Inc for heating & A/C.

They did great work. They are my go to guys when this type of work is needed. They were very professional and on time. The technician also explained all of the work he was doing. They were very trustworthy people that I felt comfortable with them in my home. I had no issues with scheduling and have used them since. I would highly recommend them. They know the job I needed done and had all the need...

DESCRIPTION OF WORK
They did the electrical and HVAC work throughout my house when it was built.

The coil leaked after 13 months. He was called 14 or 15 times and refused to come out. I have my mother living with me who's 87 years old. There was a 15 degree difference between the back of the house and the front of the house, and this is only a 2,000 square foot home slab. He finally sent someone out after I called the secretary of state and the licensing board to have his license revoked. I h...

DESCRIPTION OF WORK
They put in a central heating and air conditioning unit in the house that I bought.

This customer works for another heating & air company. The home belongs to his mother. Customer was never available to meet us during scheduled times. When we would arrive, his mother had no idea why we were there. Customer did report to the BBB and after we responded to the BBB they dropped the case. We were never contacted by the Secretary of State regarding his complaint. Once we were able to g...