Decorative Concrete
Chimney Repair
Windows
Landscaping
Gutters
Flooring Sales and Installation
Fencing
Electrical
Decks and Porches
Concrete Pouring and Repair
Licensing
Bonded
Insured
All statements concerning insurance, licenses, and bonds are informational only, and are self-reported. Since insurance, licenses and bonds can expire and can be cancelled, homeowners should always check such information for themselves. To find more licensing information for your state, visit our Find Licensing Requirements page.
Business Details 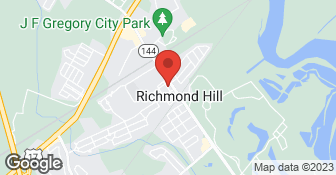 Mr. Electric of The Coastal Empire

Mr. Electric serves the electrical upgrade, installation, and repair needs of residential and commercial customers throughout the area since 1998. You can feel confident calling Mr. Electric, knowing that our highly trained Service Professionals will treat you, your family, and your property with the respect and attention to safety you deserve. We are a locally owned and operated company, and as a result, we understand the needs of our customers. Whether it's hanging a ceiling fan, installing a custom-designed landscape lighting system, or rewiring a commercial structure, you can call Mr. Electric. We have the power to make things better! See website for additional services offered. Additional DBA - Mr Electric Corp. Locally owned & operated.

Our business is our livelihood but it is also so much more. Ragsdale Roofing And Innovations LLC was started to fill in a void in the current market and to make a business that people can place their trust in. Over the years we have never lost our commitment to our clients and that is what has allowed us to succeed in a very competitive industry. The employees of Ragsdale Roofing And Innovations LLC stand committed to our purpose and will provide the best service!

I didn’t like the guy because he wanted to follow me throughout my house. I just pulled his number out the air. He didn’t do any kind of review or inspection to see if I needed one. I told him if he can come down and he just said sure. I tried to call him and he never called me back. Then I heard from the news that he took $40,000 from military who wanted his service. I would never recommend him t...

DESCRIPTION OF WORK
Coastal Empire Roofing & Construction gave me an estimate for our roof.

Took a deposit and never came back. Do not deal with any company called Coastal Empire or anything similar that sells pools, sunrooms or interior remodeling. The owner is Matthew Gates and he has pending Felony Charges in Bryan County Court. He Drives around in a older van with his companies logos on it, but they don't have the capital to complete a job.

DESCRIPTION OF WORK
Took a deposit but did not finish the job.

They did a wonderful job on my sunroom. A previous contractor did a VERY poor job - the sunroom was a disaster. But Coastal Empire made it BEAUTIFUL!! I was very happy with the results. The workers were very nice, and always cleaned up after their work.

I recently had a poor experienced with this Richmond Hill Contractor who is a member of the Richmond Hill Chamber of Commerce and licensed with the city of Richmond Hill, GA. Below is a detailed account of what happened in my dealings with Coastal Empire Roofing and Construction Company.   On September 22nd my friend backed into my garage and did some damage.  He put a claim into his insurance for...

DESCRIPTION OF WORK
Coastal Empire Roofing and Construction Company canceled an appointment for an estimate an hour before they should have arrived.  Their reasoning for not attending our estimate appointment was because my husband was deployed and would not be able to attend the appointment.  They were informed of this up front and assured I had both the ability and legal paperwork needed to act on behalf of both my husband and myself. However, they still refused to provide an estimate.

I had a sunroom that a previous contractor had built, but that contractor had very shoddy work. The room was a nightmare. Other contractors wouldn't touch it, but Coastal Empire made it look wonderful! The workmen were very polite, tidy, and did a great job! I am very pleased with the work they did. I now have a beautiful sunroom that I can actually use!