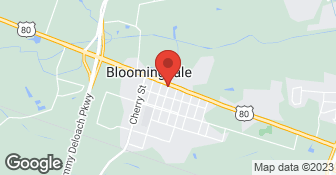 I can't say how great they are. My boxer Duckie never wants to leave and is always excited to go to Shaggy Chic Pet Grooming. Everytime we get close to the groomers shop his whole back end starts to wag. I love to know he's excited to go there. I work long hours and they are always willing to work with me on pick up if I am run in late. Shyshy loves it, she's my shihtzu, and every once and awhile ...

DESCRIPTION OF WORK
I have a Boxer and shihtzu and the Duckie gets a bath weekly and shyshy get a sanitary monthly.

DESCRIPTION OF WORK
They did a great job on the grooming, and the price was very good, but they cannot walk your pet in case he has to go, my dog was in there for 6 hours before it was his turn to get groomed. He was so upset, he had colitis that night. The only way I would take him back is if I had an appointment, and stayed there with him.

DESCRIPTION OF WORK
We had used Shaggy Chic for a number of years, following the shop from one location to another. On the last occasion, I took my cocka-poo in for a grooming, and was told that he would be done about 2 p.m. I happened to be on my way home between noon and one, and stopped to see if he happened to be done early. We had previously had some problems with one of the owners children calling the wrong phone number when my dogs were done. When I got there, I didn't hear the normal dogs barking. As I approached, the owner's daughter came out shutting the door behind her and blocking the doorway. I though this was a little strange, as I had been to the shop numerous times, and this was the first time ever that anyone ever came outside. I asked her if my dog was done, and she said, "No, they were behind, and she didn't think he would be done until well after 3 p.m." She physically blocked the entire doorway. As it happened, that day my husband and I had an appointment in a neighboring town at 4 p.m. I knew that we couldn't complete the appointment and be back to pick my dog up before they were closed at 4 p.m. I didn't ask for the dog then, but when I got home I told my husband how oddly the daughter had behaved and how evasive she had been about what time the dog would be done. He called and found out that they had just finished the dog's bath. We had dropped him off between 8 - 8:30 a.m. with a pick-up time of 2 p.m. It was about 2:30 p.m. when my husband called, and they had just bathed him! He still needed grooming. My husband went back to the shop, picked up the dog. They charged him for the bath. He rushed home, dropped the dog off, and we barely made the appointment. We will not go back there again. The daughter is an odd person. I have no idea of what was really going on, but I truly did not feel that whatever was going on that day was in my dog's best interest. Since the daughter is there even more than the owner, and I don't feel comfortable leaving my dog with the daughter, we've found other groomers, that while slightly more expensive, at least I don't have to be concerned about the welfare of my dog.

My dog has a lot of hair and I wanted her shaved really low.They did exactly what I asked for and It came out great. They even put a scarf around her neck (too cute). I was a little nervous because I usually take my dog to one of those chain pet stores for grooming. I decided to try this place out because it was much more convenient and I really ended up liking it. I felt like I got more personal ...

We love Shaggy Chic and have been taking our furbabies there for about 4 years. They know our dogs and their likes/dislikes when it comes to grooming. The cut/groom is always wonderful and my dogs look great when we pick them up. My husband and I don't worry about them when they're at the groomer's since we know they're in good, caring hands. In fact, Shaggy Chic actually caught a health problem i...

DESCRIPTION OF WORK
We dropped off our two small dogs--one to be cut and the other to be bathed. We take them for this service 6-8 times per year.

We are more than happy to assist your furbabies as well as you! It is such a pleasure to groom your babies. We love them!