A Rated | 3 Reviews
Request a Quote 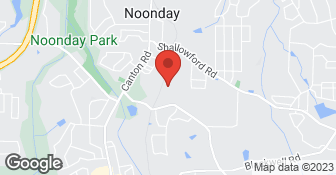 Are you looking for a trustworthy roofing and exterior contractor in the Atlanta area with more than 35 years of construction experience? We have over 35 years combined remodeling/construction experience and our written processes are designed to keep all of your projects within budget and time constraints. Your dreams will become a reality when you choose to work with Frank's Roofing Solutions....

DESCRIPTION OF WORK
They repaired a spot that was leaking.

Royal Remodling started when the said they would with no drama. The tear down went extremely well. The crew discovered some issues with an existing chimney, but fixed it quickly. The change order cost was fair. The rebuild also went well with a couple of change orders for things we wanted to add that were beyond the original scope of the project. No construction project ever goes perfectly, but th...

DESCRIPTION OF WORK
We wanted to tear down our existing screened porch and deck and replace it with a much larger porch and deck. We selected three contractors to bid on the project. We had experience with Ryan Richter of Royal Remodling from some earlier work he had done for us, so he was one of the three. Royal's bid was in the middle, but our comfort level was highest was with them because of Ryan's understanding of how we wanted the job to go. He was also able to start on our project in the time frame we wanted. This was a design and build project, so an up-front trust factor was paramount.

They do good work. They are punctual and they have fair prices.

DESCRIPTION OF WORK
I use them all the time and I am using them right now. They last did stucco repair.

General Information
Licensed
Yes
Bonded
No
Insured
Yes
Free Estimates
Yes
Eco-Friendly Accreditations
No
Payment Options
Check, Financing Available
Emergency Service
Yes
Warranties
Yes
All statements concerning insurance, licenses, and bonds are informational only, and are self-reported. Since insurance, licenses and bonds can expire and can be cancelled, homeowners should always check such information for themselves. To find more licensing information for your state, visit our Find Licensing Requirements page.