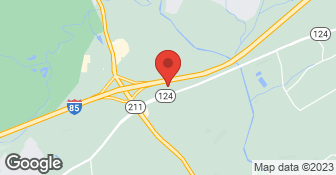 Thank you for viewing Benjamin Franklin Plumbing! We are a family owned and operated firm. Our Atlanta office opened several years ago and we have been steadily growing our business over that time. Steve Garner is the President and Owner of Ben Franklin Plumbing of Atlanta. Mr. Garner and his family have lived in the greater Atlanta area for more than 30 years. We are licensed, bonded and insured and offer 24 Hour emergency service. We background check and drug test all technicians. We know your time is valuable so we stand behind our slogan "If there is any delay, It's you we pay". Award winning. Additional contact name - Amanda Barrett....

We have the experience and dedication to bring your dreams to reality! Specializing in Appliance Repair, we guarantee your satisfaction, and we won’t leave until the job is done right. We pride ourselves on the quality work we provide, while delivering great customer service! Call or click to schedule a service call today!

Family owned & operated. 100% satisfaction is the one thing we strive for. Our technicians have over 10 years of experience in the field and are ready to serve you. Our techs are equipped with the latest and most up to date tools in the industry to make sure we do the job right in the first attempt. Call us. Additional address - 5086 Marsh Creek Ct, Braselton, GA 30517.

ITS A WORST EXPERIENCE FORM A MANAGER OF THE STORE TO TALK TO A BUSINESS OWNER. WE HAD ALREADY TOLD THE TECHNICIAN TO GO AHEAD AND ORDER THE PARTS. WE WERE AWARE OF THE COST. ONE OF THE TECHNICIAN TOLD MY HUSBAND TO CALL ON 9-12-18 IF THEY DIDN'T CALL US. I WAS OUT ON 9-13-18 SO DIDN'T GET A CHANCE TO CALL AND CALL THEM ON 9-14-18 AND ASKED HIM WHAT IS THE STATUS OF THE PART? HE SAID WE HAVEN'T OR...

DESCRIPTION OF WORK
HAVE MY URANITOR FIXED

Service providers were very professional, they were prompt, and they installed the hot water heater the same day. Price was several hundred dollars less than other companies quotes.

DESCRIPTION OF WORK
We had a leak between the water meter and our house and decided to replace the entire line with a copper water line. Pedro and Jeff initially came out on a Saturday...as an emergency call. ( I thought we must have an irrigation problem, but it was much more major than that.) After their assessment and estimate, we gave the go-ahead and their office scheduled locators to be marked for utilities. As soon as that was complete, the work could begin. Pedro and Jeff spent more than 9 hours in the oppressive heat, never complaining while they worked diligently. My husband and I were very impressed and appreciative of their expertise. The front bed was a raised bed and a tremendous amount of digging was required. To run the line from the meter, they had to navigate a sidewalk. Thankfully, they did not need to disrupt the sidewalk but were able to place the tubing under it and into the large bed immediately in front of the house. Shrubbery and flowers had to be excavated and the fresh mulch had to be moved. Amazingly, you would not know anyone had touched the bed. I know that I will dilegently have to water the shrub that was moved and the flowers, but I am so grateful that they treated our yard as if it were their own! When compared with the previous plumbing company (large and nationally known), there was NO comparison. Yes, it was expensive and we hated to do it, but ignoring the problem was not an option. We believe the pricing was competitive. They also fixed a water leak in the foundation wall in our basement. The total cost was $3138...five year warranty. Do not hesitate to call this company and ask for this outstanding team...Pedro and Jeff!!

Prompt and courteous service throughout the entire process.

It was taken care of but owner was not shown how to operate the control and piolet light. There was an attempt made to over charge by double of what I was quoted.