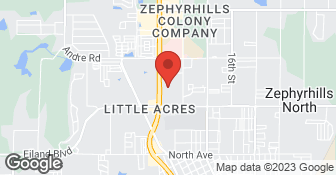 Spoke with Christian (receptionist?) on 1/28/16 but she says they will not wave the fee. Seems like they are more interested in collecting a punitive fee than actually treating patients! What a way to treat a patient who has been going to Fla medical clinic since 1996.

DESCRIPTION OF WORK
I was advised by another doctor to see an Ear-Nose and Throat doctor to evaluate if I was a candidate for surgery. I  called the ENT office at Florda Medical Clinic- where I have been going for 20 years. They made me an appt with the a nurse practitioner - instead of the doctor. When I went to the appointment, she told me I was NOT a candidate for surgery, but scheduled me for a follow up appt with the doctor. I forgot about the appt and now they charged me a $40 fee because I was a no show!

He is very professional and everyone in the office was very friendly. Even the therapist I went to afterward was very helpful and friendly. I was in and out of the hospital and walking the same day as the operations. I would do it again in a heartbeat.

DESCRIPTION OF WORK
He did both my knee replacements.

Since this is a health issue/concern, no details will be provided.

When I complained about the pain, the first few visits he ignored me.  When I finally got direct with hm and said we need to do something about this pain, he said rudely: "you need to lose 100 pounds."  His nurse who was in the room at the time (and heavy set herself) was dumbstruck that he said that.  After that I insisted that a nurse be in the room with me at all times when he was there.  I com...

DESCRIPTION OF WORK
I was sent to him by Gallagher Bassett as a result of a workers comp ankle injury.  I was in massive pain and could not stand for more than a half hour at a time.  Walking was very difficult.  I saw him 5 or 6 times over the period of 6 months.  On each occasion he wouldn't even look at or touch my foot until I forced him to, but instead just stared at his computer.  When he would speak to me he was extremely hostile.