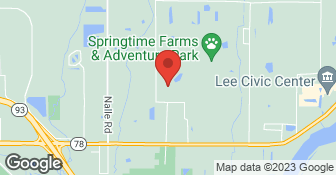 Local family run plumber | Emergency service | License #CFC049425 | Rick & Nola met in 1999 and married 2003. At the time Rick had been running his own successful plumbing company since 1990. Nola started her plumbing career at Ferguson Enterprises in 1999 as a Showroom Consultant. She worked with Plumbers, Builders, Designers and Home Owners in the selections and design of plumbing for Remodel and New Residential Construction. As with most things, Rick & Nola agree on Good Customer Service. Which consists of the highest quality of workmanship, competitive and fair prices, and treat people like they would want to be treated. With these high standards of customer service and plumbing quality, Rick & Nola want you to think “Southern Plumbing Solutions” when you think about plumbing.

At Next Plumbing, our number one priority has always been to provide top-quality plumbing work for our customers. Perhaps, one of the great testaments to this is the recognition we have received from respected organizations and our peers throughout the years. next Plumbing is a fully licensed & fully insured plumbing company. We do not charge overtime to our customers in need of after hours emergency service. We provide world class service 24/7. Your complete satisfaction is what we continue to strive for. Next Plumbing has become one of the most trusted plumbing service providers in the area serving both residential and commercial properties. We are proud of the lifelong relationships we’ve built with our loyal customers throughout the years, and we are looking forward to building one with you as well.

Have used them for years and never had any problems. However this time was different. Called and spoke with office Friday evening. They told me would call on Monday. I missed their call back that am. When I called late afternoon and spoke with service tech, Jason, who would be coming out, made appointment for 8am next day (which totally changed my schedule for morning). He was no call no show. Nex...

DESCRIPTION OF WORK
Toilet leaking at bottom. Think I needed a toilet flange wax ring replaced. Not an emergency situation.

DESCRIPTION OF WORK
They are excellent. It is family owned and operated company. He ripped out the piping, he redid the hot water tank and moved it too. He was there for over 4 hours doing all this work for me. He also had to come back twice, because he had to flush out all of the pipes.

Called Dennie late on Friday afternoon.  He returned call within an hour and,after taking information over the phone, scheduled a service call fo the following AM.  He was very punctual, professional and completed within an hour so that we had hot water by 10 AM.  Pric was very comptitive, especially since it involved an emergency call on a Saturday morning.  I would definitely use him again (alth...

DESCRIPTION OF WORK
Water heater needed to be replaced as it sprung a leak.

Overall, it was disappointing and sloppy and very expensive IMO. He was here about an hour. He is a pleasant man, but I doubt he has been trained to be a plumber. If I recall, he asked me for a wrench, but then got one from his truck. Overall, again, the level of his expertise is questionable and I would not hire him again.

DESCRIPTION OF WORK
Dennie' s Plumbing was one of the plumbing services recommended to me by our management company. Two of the recommendations are no longer in business.And the manager said he had no feedback on Dennie's. But the plumber was pleasant on the phone and upon arrival. During the service he made comments that the previous plumber had made mistakes in replacing a new pipe when the pipe flooded the undersink area in the kitchen. There was approximately an inch of water standing. The pipe, he said, broke from a joint and flooded the undersink. As he removed items from the cabinet, which I should have done myself I know, he picked up boxes that were clearly bulging from water. This caused white powers to spill all over.He remarked that he didn't know what the "white stuff" was. He got the water turned off and installed a new pipe, showing me how the previous one had been poorly installed. I had a bottle of bleach ready for him to wipe the back area, an area my knees don't allow me to reach, as it was black and I asked him if it was mold (this was my third flood in two years). He said he didn't know, didn't think so, and he knocked over the bleach onto the rug that was under the sink area. It was a new, very good rug. Again, I should have removed it I know. I did put some old towels for him to use. Still, I would think a plumber would have cleared the area he was working. He told me not to worry, that "the bleach will come out."! He fixed the leak. I asked him if he would snake my bathroom sinks and he did. He left the bucket with all the crud in one of the baths. I had asked him if he was licensed and insured on the phone, so I expected a level of professionalism that I had known before up North. I asked him if he was a Master plumber, and he said O, yes. He clearly is not. I know plumbers are expensive, but I expect them to also be trained beyond DYI experience. I think the fellow is really a handyman with a license. According to my bank teller, he cashed my check for cash as soon, by my calculations, as he left here.Did he think I would stop payment on it once his work was inspected? That is only speculation, but it comes from a deep mistrust of his level of professionalism.When the next plumber comes, because I now have a water leak in one of the toilets, I will ask him to inspect the kitchen piping. I would not recommend Mr. Miller for anything more than snaking drains or tightening pipes for small leaks. For many people, but probably not seniors like myself, these jobs can be done without plumbers.