Tree Service
Lawn and Yard Work
Landscaping
Handyman Services
Lawn Irrigation
Licensing
Insured
All statements concerning insurance, licenses, and bonds are informational only, and are self-reported. Since insurance, licenses and bonds can expire and can be cancelled, homeowners should always check such information for themselves. To find more licensing information for your state, visit our Find Licensing Requirements page.
Business Details 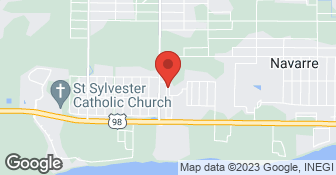 Small family business, along with long term employees have made this company a success to date. Everyone working for Hammerhead has know each other for 30 plus years. We are very picky about who we bring into your house.

Clean-2-Xtreme,LLC Lawn, Landscaping and Irrigation is a family owned and operated business based in Navarre, Florida. We are a fully licensed and insured LLC company for your protection. Our goal is to build strong and long lasting relationships with our clients. In doing so, we pride ourselves on our integrity, dependability and a company that does the job right each and every time. We specialize in many types of work; Landscaping, Lawn Care, Sprinkler System Repair, Maintenance for Lawn. No Contracts

One thing is for sure, we know trees. Trees 4 Sure is licensed and insured to offer an experienced climber to handle your needs both efficiently and safely. Also, for around the clock emergencies, we provide a 24/7 storm response program. Get your FREE estimate today. Here are the services that we offer: -Tree Cutting and Removal Services -Tree Pruning and Trimming Services -Palm Tree Trimming -Tree Maintenance -Emergency and Storm Services including a 24/7 Storm Response Program

I had no problems. My daughter-in-law said that she thought it was a good price.

DESCRIPTION OF WORK
He did trim some trees.

Was a little slow in getting started as helpers did not work out so he found new ones.  The work was of excellent quality in taking time to make sure the job was completed to my satisfaction.  Trees were trimmed well and he kept them balanced and looking great. Clean us was not as good as expected as I had to complete some of of the removal of small trash but very little. I would use him again and...

DESCRIPTION OF WORK
Trimmed or removed 15 or more live oak trees in the yard.

DESCRIPTION OF WORK
I got an estimate from Jr's Landscape And Tree to remove some trees.

JR gave me a price for removing the one tree. When I asked whether he would be willing to trim other trees, he readily agreed but suggested an hourly rate. I pointed out limbs I wanted trimmed and JR removed them as requested. He did a great job and was very accommodating. He remained aware of the hourly rate and worked quickly and efficiently, even commenting to his helper at one point, "Let's mo...

DESCRIPTION OF WORK
JR removed a dead tree and then agreed to trim dead limbs from  a bunch of live oaks.

The job proved to be more involved than first anticipated, requiring two extra days, one extra day to complete the trimming and one additional day to haul away the debris.