Drywall
Concrete Driveways
Decks and Porches
Concrete Pouring and Repair
Closets
Unfinished Carpentry
Awnings
Licensing
Insured
All statements concerning insurance, licenses, and bonds are informational only, and are self-reported. Since insurance, licenses and bonds can expire and can be cancelled, homeowners should always check such information for themselves. To find more licensing information for your state, visit our Find Licensing Requirements page.
Business Details 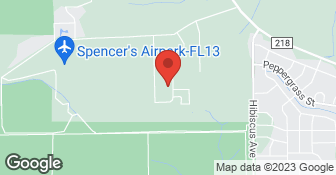 As a Florida Roofing Contractor, we have become metal roofing experts. We are affordable and take the energy efficiency of metal very seriously. As a Florida Building Contractor, no job is too big or too small. Household repairs to complete room additions and remodeling, we treat every customer like family and because of it, we have made a lot of friends....

Overhead Garage Doors USA is a family-owned and locally operated specializing in all aspects of garage door services and repairs. We value honesty and integrity, and we stand behind our work. That means you'll get quality garage door services at competitive rates. We guarantee your satisfaction and we won’t leave until the job is done right. We pride ourselves on the quality work we provide, while delivering great customer service! You'll love our work so much that you'll want to make us your go-to garage door company. We look forward to building a long-term relationship with you.

We were very pleased and we thought they were great. We were eager to hear back from them but they never followed back up with us.

DESCRIPTION OF WORK
It was a Big Deal $149 Roof Maintenance Package. They gave us an estimate for some repairs for our roof.

They called me pretty quickly to set the appointment. We made an appointment, and they had to cancel because it was raining - they did call to let me know. They never called me back. I called them a month later, and they said that they were at my house already; they said my roof was fine. I asked for a report or some paperwork, but never received anything. I had a leak and was hoping to be home wi...

DESCRIPTION OF WORK
I bought a big deal for $149 Roof Maintenance Package.

Not well. It was difficult getting the appointment scheduled and they did not perform anything close to what I paid for and what was advertised. As I will be in the market for a new roof soon, I was disappointed that they did not follow through in sending the "analysis" of the work they did, or even the estimate for a new roof that they promised. (Date of service and price are approximate)

DESCRIPTION OF WORK
Informed me that the pitch of my roof was too high for them to do the job as advertised. He spent about 10 minutes poking around the roof.

The work provided was okay. They were very courteous. It's leaking around the fireplace and they put some tape up there, it did a little good but it's still leaking but I thought they were okay. I never called them and told them it was leaking, they were just doing a maintenance. They didn't spend a whole lot of time for $149. I think they were nice, I just don't think they did what they needed to...

DESCRIPTION OF WORK
I did use Burnham Building Contractors. I've got a leak in my roof and I don't know what's causing that. They fixed it but it hadn't really fixed it yet.

They did a great job on this and were very good about explaining everything to me when they were completed and even showed me photos of what he saw while up there. They also said there were a couple of issues that needed further work and they would provide an estimate.  I finally heard from them two months later on one of the estimates and I asked a couple of questions and they were going to get b...

DESCRIPTION OF WORK
I bought a roof maintenance special from them to come out and inspect the roof, caulk where needed etc.