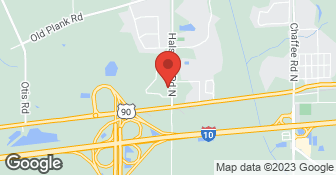 Tillman Septic Pumping is a women owned & operated septic company. TPS operates out of Jacksonville Florida. 5 full time employees. We only subcontract to stay caught up on our schedule. We have a $75 trip charge to inspect problems, the trip charge is rolled into other services if performed during that trip. Our prices are based on trip length from our shop....

Dreyer's has been helping homeowners in Florida since 1979. We are trusted by many local insurance agents to help their clients after they have experienced property damage. We also have 36 years of experience cleaning Fine Rug, Carpet and Tile flooring.

Called for septic pumping. Company was late for first time frame. Have a later time and missed that one as well showed up an hr and a half later. No greeting when they arrived, just jumped out and started dragging hoses to the tanks. Tanks were already opened by us. No discount for opening tanks. Upon finishing they had no cement to seal the lids( they ran out). While dragging hoses back to truck ...

Called and booked an appointment for the next day (they offer same day appointments but had a full schedule by the time I called). I was told we'd be the first appointment the next day and the driver would call when he was 15-30 minutes away. The driver called as promised and the team arrived right on time. They were quick, efficient, polite, and were patient explaining what needed to be done. Onc...

They called a fifteen minutes before they were supposed to be here and showed up on time.  Both workers were very nice and did a great job.  I will use Tillman again if needed.

They were on time, professional and efficient.

Called to come early and the job was done before the appointment. The service personnel were professional, friendly and courteous. Showed me what they were doing and where my system was failing. Thanks to them I did not find out the hard way with a backup into the house. That made me very happy!!!! Great job!