A to Z Awnings & Marine Canvas 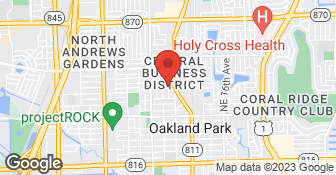 we offer the best awnings & marine canvas we offer a 10yr warranty on are products...

Awnings by Valrose is a family owned business serving South Florida since 1982 We are licensed and insured and specialized in Residential Canvas awnings with particular attention to detail and customer satisfaction. We manufacture all awnings in our 10,000 sq ft warehouse, right here in Miami and our installers are long time employees of the company. Call us for a FREE ESTIMATE for any of your awnings needs. Visit our website at www.valrose.com to see more of our work

DESCRIPTION OF WORK
We are a condo association and hired A to Z to replace the canvas pool canopy and curtain/sleeves around the poles holding up the canopy.

A to Z provided us with the best quote ($100 less than the next best offer and $200 less than two other local companies) and I scheduled them to come out on a Sunday. One of the companies that provided us with a quote, showed up on the Friday before and re-installed our canvas while we were not home, and then left. When A to Z showed up on Sunday, I gave them what I assumed was their check for the...

DESCRIPTION OF WORK
A to Z awnings installed our canvas tikki two years ago. The awning, which still looks new, had to be removed while we prepared for Hurricane Matthew last month.

To start with I called 3 awnings companies A to Z Awnings gave me a price on the spot and had the best price and  warranty The other companies waited a week to get back to me on the price . I got to tell you I highly recommend these guys they know what they're doing and they do it right the first time very happy with my new awnings' Bob Anderson

Hired A to Z awnings to replace my existing awning.  my previous awning held water and i asked them to guarantee this would not, they hemmed and hawed and agreed that the existing frame was up to spec and it should not hold water.  several months later i noticed a puddle of water and called them.  Spoke to Dan and he interupted me so many times while talking that i got exasperated and asked him to...

DESCRIPTION OF WORK
I hired them to simply replace my existing awning.  i prepped the existing awning frame by painting it and had the old awning cut off of it so it would be ready for them.  They replaced it in a couple of hours.

All we did was a recover for his existing frame. He's had nothing but problems with his frame in the past, as he clearly stated. He never had a problem with the cover that we made and installed. He called our office for a service call, we told him the fee would be 150.00 and he agreed. We went to his home the same day, once our installers inspected his old frame they showed him that his track clea...
F

They are a really bad awning company.  They were pretty bad.  They came out like three times to measure.  They didn't measure it right.  They installed it improperly.  They were really bad.  They came out here .and measured like three different occasions as well as broke light fixtures.  The thing is till this date it's not right.  They never even came back to fix what they were supposed to fix.  ...

DESCRIPTION OF WORK
My sister used A to Z Awnings & Marine Canvas to install awnings.

First of all this awning was installed by the date promised. Our installers did accidently brake a light bulb . Unfortunately sometimes accidents happen, but we did pay her for it. When we were done with our installation she was happy and paid the balance in full.

we custom make all of are awnings & marine canvas we come to you we are in fort lauderdale check us out at www.atozawnings.com