A & A CONSTRUCTION CO DIVERSIFIED INC 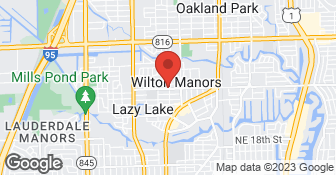 OWNER-OPERATED. USES SUBS FOR THE LABOR. COST IS DETERMINED BY THE JOB. NO TRAVEL CHARGES. NO SERVICE FEES. LICENSE #CBCO36329. MAY CONTACT BY EMAIL. ...

We have the experience and dedication to bring your dreams to reality! Specializing in Kitchen & Bath Remodeling and General Remodeling Services, we guarantee your satisfaction, and we won’t leave until the job is done right. We pride ourselves on the quality work we provide, while delivering great customer service! Call or click to schedule a free estimate today!

We have over 16 years of experience painting, water proofing, and concrete restoration. We are a 2 time winner of the South Florida Journal Reader's Choice Award.

He's not punctual; he doesn't call to tell you that he's going to be late. He Never Showed Up! I had to work till 8:00 PM last night to make up for the time waiting around for him; and all for nothing. I would tell Mr. Ansley, "if you really didn't want the job because it's too small, then say so. Don't waste anybody's time." I would have ordered my bedroom furniture today, but can't until this jo...

DESCRIPTION OF WORK
See below!

Great. Gary was nice enough to spend time with us and understand our needs. Thereafter he would make specific recommendations based on costs. He and his team had the job done in about 3 days.

DESCRIPTION OF WORK
Replaced dry wall and parts of ceiling

From the beginning I stated that I had to have one working toilet; attached is a picture of the only toilet in my house for over a month. The water tank part of the toilet was sitting in the house all the time. The front door (picture attached) was never done, even though termites had left the door framing almost nonexistent. The painters. The picture shows the lack of care taken with my furniture...

DESCRIPTION OF WORK
The contract was for remodeling 2 1/2 bathrooms, replacing a front door unit that was decimated by termites, some electrical work, some general construction, installing kitchen appliances and painting the interior of the house; per contract it specifically stated the work would take 20 working days.  The contract was signed October 14, 2008 with work starting in a few days; in February 2009 work was still not completed.  The work stopped at that time since of the stone in the master shower had to be pulled out, more details below.   I will load pictures later.  No work continued after that.

DESCRIPTION OF WORK
No services performed. Gary cam to the house and took measurements. Three weeks later I called for the estimate. It is now 2 more weeks (5 in total) and no estimate. Don't call this guy if you want anything.

Don't waste your time with this company. The owner, Gary, came out to give us a quote and promised one after we emailed him a survey, which we did promptly. He never gave us a quote nor did he answer our emails or return our phone calls. He could have at least given us the courtesy of a reply, even if he did not want the job.

DESCRIPTION OF WORK
He came to give us an estimate on pouring a cement patio in our backyard. Then he deserted us and would not return our phone calls.