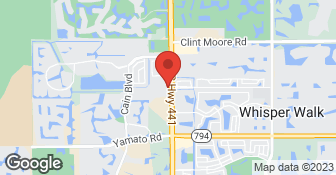 Complete automotive service center specializing in quality service and personalized care of you and all your automobiles. Service the West Boca area since 1985. An A.S.E. blue seal of excellence facility....

Firstly, I don't like leaving negative feedback for anyone unless it's really warranted. I contacted Auto Tech because of the very positive feedback they had received. Even though I had no repairs done by Auto Tech I called to make an appointment a month in advance for a classic car I own. (Called November 3rd to make an appointment for December 2nd. ) The owner's reply was that I would have to ca...

DESCRIPTION OF WORK
Just called to make an appointment for my classic car.

I was disappointed to read the review from (removed member name) on November 11, 2014. I remember distinctly speaking with him. As a matter of fact, I still have the piece of paper on which I wrote down all of his contact information. Unfortunately, when (removed member name) called we were extremely busy. I explained to him that we had very limited floor space and we already had a couple of older...
A

Chuck runs an organized, neat and structured auto repair shop that has been in business for 25 years. He bends over backwards to make sure the issues/problems are resolved and is not satisfied until they are. Again, I've never been so pleased with an auto shop. I might mention that I'm a girl. That makes it even cooler that they didn't even consider taking me to the cleaners like the many other re...

DESCRIPTION OF WORK
Rick reviewed my 1997 Jeep Wrangler with an initial diagnostic test ($150.00). He determined that the O2 sensor was completely deteriorated (among many other problems) which is what was causing the horrific exhaust odor I complained of. Even though there were many parts that needed to be replaced and problems to fix, they only took care of what I had an issue with (the exhaust). Replacing the o2 sensor completely diminished and resolved the exhaust odor which has been impossible for any other auto mechanic to complete for the last 4 years. They also were able to minimize the fuel odor by replacing a fuel vac. hose which also, no other mechanic has been able to resolve. I couldn't be more thrilled with the effort and capabilities of Auto Tech. They are the only Auto repair shop I'm happy and trusting to go back to. I have been to over 50 repair shops with the life of this jeep and none could hold a candle to this shop.

I had my car towed to facility since I live close by. Very detailed and thorough service but expensive. They also repair classic cars.

The repairs went well, there were a couple of surprises but nothing major. There was some delay in getting some of the parts in so they had to keep the car two days longer but since it was a second car there was no issues with that happening.

DESCRIPTION OF WORK
The car was just barely running. There were issues with the on-board computer, the air conditioner and the catalytic converter.

He does great work but you have to nail him down on the price and when you are going to get your car back. They are meticulous but I did not get a price for the job in advance so I was shocked when I got the final bill for around $500. I was disappointed and thought the price was astronomical. His quality of work was fantastic but the price blew me away; I had to wait at least a half-hour to get m...

DESCRIPTION OF WORK
I used Auto Tech to repair a rubber hose that runs to my gas tank. It was a specially-made hose because I drive a van for the handicapped. I also wanted him to take a look at the fuel injection system to see if it was working okay. They also replaced the spare tire liner and a couple of nuts and bolts in the back of my van.

Although we strive to turn around our repairs in as prompt a time frame as possible we are not in control of every aspect. This vehicle is a custom modified handicapped van and parts were not readily available and had to be ordered. We had no control of pricing due to availability. The customer seemed to understand when vehicle was finished but whished it cost less.

General Information
Bonded
No
Insured
Yes
Free Estimates
Ask for details
Payment Options
American Express, Check, Discover, MasterCard, Visa
Senior Discount
No
Emergency Service
No
Warranties
Yes
All statements concerning insurance, licenses, and bonds are informational only, and are self-reported. Since insurance, licenses and bonds can expire and can be cancelled, homeowners should always check such information for themselves. To find more licensing information for your state, visit our Find Licensing Requirements page.