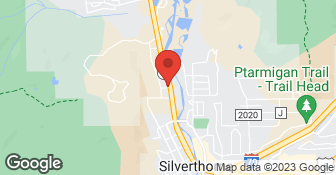 Majestic Mountain Movers provides moving and relocation services to the Silverthorne, CO area. Locally owned and operated, we have been moving residents since 1994. We do residential and commercial packing and unpacking. Our movers do both local and long distance moves. Services we provide include: Relocation services Residential movers Commercial movers Packing and unpacking Majestic Mountain Movers provides free in home estimates. Our moving estimates include packing and unpacking as well as moving supplies such as boxes and tape. For the do it yourself type we sell packing and moving materials. We take care of our customers and their belongings; you can trust your move to us. We are also a member of the BBB; we take pride in our work. Call Majestic Mountain Movers today to set up an appointment!...

Bennett's Moving is a local, family-owned and operated company, with 17 years of moving experience. Long Distance moving is our specialty. No matter what size your move is, Bennett's moving can handle it. We are not only vary good at what we do, we love what we do. Long distance moves are one of the many things that Bennett’s Moving specialize in. When it comes to long distance, we are a lot different from the van lines. 1. We are not a national company. 2. There is a owner on your move, from loading to driving and unloading. 3. We use are own movers not day labor. 4. We do not have all the many charges that van lines have, Bennett’s Moving offers a flat rate. That does not change later. 5. Bennett’s offers an exact time and day to load and unload in the state you are going to. 6. Your belongings are the only things on our trailers or trucks, we do not combine loads. We offer FREE onsite or FaceTime video estimates.

We take great pride in our extreme professionalism, timeliness and superior customer service on every job. We develop lasting relationship so that the next time service is needed there is no question on who to call. Satisfaction is guaranteed! Call us today! We are a licensed and insured moving company. Get rid of the rest and get with the best

Initially, I thought the movers did a great job. It was not until they moved me out of storage into a new home that I realized how much of my stuff was either missing or broken. Just a few items that were missing were my child's crib and mattress, another full size box springs and mattress, a queen box springs, all of our yard tools, shovels, rakes, steam cleaner, sleeping bag, and a box of kitche...

DESCRIPTION OF WORK
moved from home to storage, then a few months later out of storage into a new home

I thought they were very nice.

DESCRIPTION OF WORK
They were very reasonable. Their workers (the guys that load the trucks) are wonderful. They loaded the truck and held it for me and did not charge me for holding it.

Iam kicking myself for not having read the other review for this Mover before using them.  Same issue - billing after the fact and Rhonda Anderson;   First, let me say that if I could divorce Rhonda and the billing from the actual move itself, the review would be considerably different.    Four guys were scheduled to move me and the four guys that came were great.  They were polite, professional, ...

DESCRIPTION OF WORK
Moved me from Paonia, CO to Silverthorne, CO.  I moved approximately 125 miles.

Movers were  late in showing up and were met by the owner Rhonda.  She had come by the property during the estimate process so they could assure accuracy of estimate.  i understand her intention was to be sure the 2 movers had a handle on the move and also wrapped 2 TVs for them.  She had other work and left a few hours after arriving and prior to the completion of the truck packing.  I assisted i...

DESCRIPTION OF WORK
I contracted with Majestic Mountain movers for a move this summer.  We had used them previously for small local moves.  Mostly impressed with the service.  They were were very gentle in previous moves and in this move.  This move was a move 100 miles away from their home base of Summit County.