A TO Z ROOFING 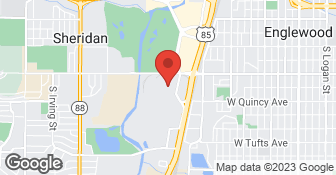 With nearly 20 years of experience in the Denver roofing industry, A to Z Roofing prides itself on superior workmanship and customer service. Specializing in both residential and commercial installations, we hope to be your next roofer of choice! Why A to Z Roofing? We are: ■Licensed and Insured ■Accredited Member of the Denver/Boulder Better Business Bureau ■Member of the Colorado Roofing Association ■Member of the Apartment Association of Metro Denver ■Owens Corning Preferred Roofing Contractor ■GAF/ELK ‘MasterElite’ Certified Contractor ■CertainTeed ‘ShingleMaster’ Certified Call today for your comlimentary estimate!...

Our Crews are top of the line with an outstanding track record and have more experience than most competitors; formed through long lasting relationships over many years we will provide you with the best craftsmanship and service in Colorado.Our expert crews can handle any type of residential or commercial roofing Including, asphalt shingles, wood shake, Metal, TPO, EPDM, Tile, Modified Bitumen "Flat Roof", gutters and anything in between. If the type of roof or gutters you are looking to repair or replace exists we can help you.

Excellence Roofing & Construction LLC is a local roofing contracting business specializing in new roof installations, repairs, and replacement roofing services to commercial and residential customers. Our company is small by design. This has enabled us to pay closer attention to the details and give our customers more personalized service. Our staff has a combined 28 years of experience of all types of roofing systems. We maintain a staff of well-trained shinglers and flat roofers. We have extensive knowledge in roofing and work hard to deliver the best service to our customers. We take pride in our workmanship and our first priority is to make our customers satisfied.

Protect your family and your investment with the help of our experienced and skilled team of roof specialists from a reliable roofing company in Denver, Colorado. Masterpiece Roofing & Painting does roof repairs and complete roof replacements and we excel at making sure your home looks the way you want it. If you need roofing services to repair storm damage or just want a new house paint, we are always at your service. Call us if you need any of the following services: * Roof Inspections and Assessment * Roof Repairs and Service * Residential Roof Replacement * Commercial Roof Replacement * Insurance Claim Assistance We are professional insurance negotiators. We get your roof approved by your insurance company if there is enough damage. 1st we assess the damage. If enough damage exists to get your roof bought from your insurance company then we have you sign an insurance agreement which means we will walk your roof with the insurance adjuster & get your roof & any & all damage bought & then we will repair everything in your insurance adjustment. We are also the very best house painters in town. We have experienced painters that can turn your home into a Masterpiece!

My experience with A to Z roofing was a complete disaster, and after seeing their recent ad in the Angie's List magazine, I felt compelled to post here, despite the fact that my experience was a few years back.  In early summer of 2009, the roof on my home was declared a loss by my insurance company due to storm damage to my then-obsolete shingles.  I was referred to A to Z by my my long-time insu...

My husband asked me not to write anything derogatory about A to Z roofing since after over a month they did finally manage to repair the countless things they damaged so here is my "NICE" version. 1) Take photos of your house before they get there.  This means, gutters, siding, tube lights, soffits, oh yeah siding, flashing, any and everything on or around your roof.  2) Most likely your sales per...

DESCRIPTION OF WORK
We obtained an estimate from them to tear off 2 layers, re shingle, and cut in soffit vents.  We were assured our tube lites already in place would not be an issue for them to remove, replace new shingles and reinsert.  Nothing we wanted was going to be an issue.  We hired them based on BBB A+ rating and Angies List.

All truths are not being told. Yes, there were some small issues with this particular installation, but A to Z Roofing went above and beyond to address any and all concerns with the customer. As a company policy, photos are taken prior to job start for situations such as this. Siding: From our (pre-install) photo documentation, the siding was damaged and covered in tar. The product was old galvani...
A

The job went very well. See above.  If your house is situated such that the roofer will have to park on your driveway,  do make sure they have vehicles that don't leak oil. If you have run flat tires do make sure you have road hazard warranties because even though they cleaned up I did get a flat tire.   Run flat tires that cannot be repaired.

DESCRIPTION OF WORK
Our roof was damaged in a hail storm July, 2011. State Farm recommended A to Z Roofing.  Dwayne, who used to work for State Farm as an adjuster came out and after examining the roof, said we needed a new one.  This would be the 3rd in 5 years! We settled on a bid. He explained in detail the scope of the work.  I felt he knew the business well. I did not get other bids though I did research A to Z 's performance. They started the work close to when they said they would.  There was a minor kerfuffle with their delaying several hours which meant the skylight replacement contractor had a work around.  But it worked out quite well.  A to Z had a large crew and they completed the work in 4 days with just a couple of minor details punched out in the following week.  They were very good about communicating and following up. They cleaned up the site each day.  The workers were hard working and polite.  The work from my unprofessional eye looks very good.  Passed inspection.  A to Z was much better than the previous two roofing companies I used in the recent past and I would use them again.  A couple of caveats.  I don't think the gauge of the metal used in the gutters is as thick as the original.  In fact it bent when the crew placed a ladder against it and the whole section had to be replaced.  I can't imagine what is going to happen when the next hail storm strikes. The same could be said for the roof vents, stacks and flashing. I also have come to realize that I need to do more research regarding these materials that go into such a large project.  I did research the shingles.  The highest impact shingle available.  I still wonder if this will resist the next storm since the previous shingles were high impact.  I don't know much about quality materials used in the construction trades but I think I am obligated to know more in order to evaluate the quality of the bids that I got from the contractors.  In three recent roof replacements I felt uncomfortable about some aspects of the job including this one.  That's why I gave them a B rating on price.  Maybe it's just me, but I feel like I'm playing poker and that I left some money on the table which I wouldn't have done had I known more.

Live in ski town 90 miles from Denver. Cautioned about using out of town contractors. Because of competitive pricing we tried a Denver firm and were 100% satisfied. Mill Run Condominium Breckenridge Co.

DESCRIPTION OF WORK
Put roofs on to condominiums we manage and a house we just purchased.