B Rated | 48 Reviews
Request a Quote 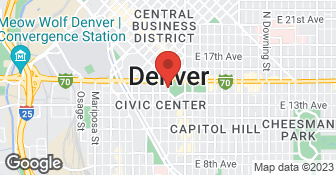 2 EMPLOYEES. NO SUBS. COST IS DETERMINED BY THE JOB. NO TRAVEL CHARGES. NO SERVICE CHARGES. EXTRA CHARGE FOR AFTER HOURS SERVICE MAY APPLY.WEEKENDS ONLY BY PRESET APPOINTMENT...

It was an Angie's List Big Deal that I purchased. It went fine. He was very friendly. He did what he was supposed to do but it wasn't as effective as I would have liked. I still have a little bit of a problem with the toilet still be a little bit plugged up but it is not as bad as it was.

DESCRIPTION OF WORK
I used 2 Steves Drain Service to clean out the pipes for the toilet.

Steve scheduled an appointment to come out to our house and unclog a toilet for Friday morning, but said he'd try to come out today, Thursday afternoon, if his other appointment went quickly.  He arrived promptly - just about 2 hours after my initial call to him. Steve arrived with all tools necessary to complete the job.  He finished unclogging the toilet quickly and even cleaned it!!  I was very...

DESCRIPTION OF WORK
Unclogged a toilet.

This is the second time I've used them. I wanted the sewer drain snaked out because the washer had backed up again. The man I talked to said it was probably just the washer drain--not the sewer. He said he didn't want to do the sewer if it wasn't necessary. He came out and looked at the drain and said the drain trap was in bad shape and he was afraid that cleaning it out would damage it, so he ref...

DESCRIPTION OF WORK
Professional and honest

They snaked the line and fixed the problem. They were courteous and on time. I mentioned another problem I thought I had.  They were very honest in telling me how to fix a small thing with no extra charge.  I will definintely use their services again!  Thank you, 2 Steves!

DESCRIPTION OF WORK
We had a flood in our basement from the backed up sewer line - YUCK!

I thank you very much for the very nice things you had to say about us. and hope you will keep us in mind at later times of need 2Steve's
A

We had some roots clogging the sewer line and the previous company did not completely finish the line through to the city tap. The house was due to close in less than a week and we needed to complete the work so the buyer could have the line scoped. Dave agreed to come out on a Sunday morning after I called him Saturday afternoon. I very much appreciated his willingness to have his workers respond...

DESCRIPTION OF WORK
We had some roots clogging the sewer line and the previous company did not completely finish the line through to the city tap.

we do a lot of big apts. And when thay are flooding we have to do them first becuse thay can't stop using there water. I hope that you will keep our number and use us again. thank you for your work 2 Steve's

General Information
Licensed
NA
Bonded
Yes
Insured
Yes
Free Estimates
Ask for details
Payment Options
Check, Visa, MasterCard
Senior Discount
5.00
Emergency Service
Yes
Warranties
Ask for details
All statements concerning insurance, licenses, and bonds are informational only, and are self-reported. Since insurance, licenses and bonds can expire and can be cancelled, homeowners should always check such information for themselves. To find more licensing information for your state, visit our Find Licensing Requirements page.