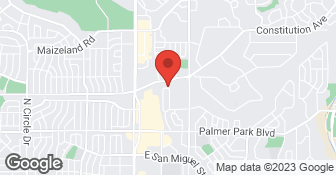 Local, family-owned moving company with a strong reputation for quality service. Best prices and movers in town. Your peace of mind is our job.

We are proud winners of the Angie's List Super Service Award for 8 years in a row in the Moving Category! We are a full service moving company located in Colorado Springs, CO. Helping Hands Moving was created in January of 2004 by us, Shauna and Steve, two residents of Colorado Springs. Combined, we share a 25-year history in the moving industry. A lot of our thanks is to you our customers and our teams. We have made it our goal to provide excellent customer service and unbeatable moving services in and around the Colorado Springs area! Our moving crews have many years of combined experience in the moving industry. They will offer the best quality moves with immeasurable respect! We are fully licensed and insured. We are a member of the Better Business Bureau of Southern Colorado.

He still hasn't contacted us to pay the Furniture Medic Charge of $200.00

DESCRIPTION OF WORK
Hawkins Moving Co is a Sub-contractor for Mango Moving, Formerly Build My Move. Hawkins was hired to move heavy furniture into a PODS unit in my driveway. They loaded all they could as contracted. The problem occurred when they unloaded the PODS unit at the new address 10 days later, and all the damage to furniture started to appear. I was fully covered for the insurance through Build My Move for $ 40,000.00 with a $250.00 deductible. There was damage to wood furniture and to coat hooks on a coat hall tree. Kevin Hawkins kept telling us that he would take care of the damage instead of us filing a claim with Build my Move, because they would only give us .50Cent per pound. I am always about helping the indep[endant or helping the little guy so I believed him. He stated to get in contact with furniture medic and he would settle with them on our damages. This was so it didn't appear on his work record with Build My Move. We agreed much to our displeasure now. I have attempted to contact Kevin at least four times to get him to pay the $200.00 Furniture Medic charged. These conversations about Hawkins paying for the damage were all done in the presence of the painter that we had hired to do some painting. So there is a witness other than my wife or myself, to include the other mover named Brandon. Kevin Hawkins Moving co did a fairly good job moving ,he just doesn't honor his word. Do not believe that he will pay if you use this Colorado Springs Mover and you have damage. He is a BOLD FACED LIAR!