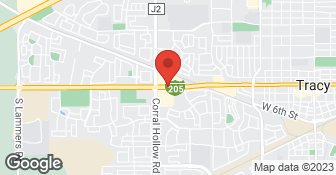 Jules Veterinary Center has been serving the Tracy California community since 2002. Dr. Kecia Valdez opened the practice to honor her Miniature Schnauzer who was the reason she attended Veterinary School. Sadly little Jules passed away just before the hospital opened. Jules prides itself on helping clients understand their pet's medical conditions. Your pets are a member of the family and we take every precaution in keeping them safe and healthy. The staff at Jules Veterinary Center is always open to your questions and concerns and prides themselves on client education and preventative health care....

DESCRIPTION OF WORK
I went in for one thing and they tried to get me to spend $600 on something that my new vet said wasn't needed. | |They were good when Dr. James Barnett was there but he left and they were just in it for the money.

I was satisfied with the visit and my dog got better in a few days.

DESCRIPTION OF WORK
Diagnosed an ear infection, cleaned the ear, gave me meds to use every day on her ear.

Our Cavalier has suffered from siezures for about 7 years. We took him to a couple of vets in the area but there was no improvement. The seizures were increasing in frequency and duration and there was a time when he was having cluster seizures (one right after another). About 5 years ago we took him to Jules Veterinary Center and they were able to control his seizures with medication. It took mon...

DESCRIPTION OF WORK
The date and cost above were when we took our Cavilier King Charles Spaniel in for a routine checkup and immunizations. However, our Cavalier began having seizures and Jules prescribed medications that reduced and eventually stopped them.

New to town and very fussy about who cares for my aniimal companions. This particular little dog is a biter. Made an an appointment as she had an ear infection which she often gets due to allergies. Check in went well and I did not wait long to see the doctor. My dog Tea Cup was weighed and had her temperature taken by vet tech. When the doctor came in Tea Cup was muzzled and the doctor checked he...

DESCRIPTION OF WORK
All I can say is a SUPER! In February 2011, we adopted a dog named Todd, and named him Jack. All of his visits to Jules Vet were great: he weighed in, nice staff, short wait, and then we were placed in a waiting room. The Vet who tended to Jack, happened to be the one who neutered him as a stray and recognized him and showed alot of love. The physical went well. He needed very little care---but I had tons of questions since I hadn't been a dogowner for the last 3 years and certainly never had one with as much energy as Jack. All of his vaccines were quickly addressed. Then I noticed he never had a dental cleaning. They informed me about their sister hospital, "Lathrop Vet". They called for me. They could clean his teeth the very next day and they explained the whole procedure. I didn't have to wait on a list....they serve the later hours and come to find out....they also have an excellent Board and Care Facility (SUPER clean and SUPER accommodating). After Easter we went on a little 4-day vacation to see my eldest son---Jack was very well taken care of by Melissa and all the other staff. Melissa made sure Jack socialized with the other dogs and eased him into it....she even took video tape on her phone and answered my calls from my hotel to see how he was doing (and so did all the other staff)---I had explained he barked incessantly when anybody came to my front door, and he didn't seem to know how to socialize with other dogs (on leashes) at parks. However, once we had him home, after HIS 4-day vacation, he fit right in at the dog-park on Kavanaugh near Holly! He goes 3 times a week and stays up to an hour each time, having fun with all different sized dogs. The next day, after the teether cleaning, Jack had a reaction to a body oil placed down his back after being at a groomer the day before the dental cleaning, causing blisters, oozing and itching, and Jules fit Jack right in AND also found his tail was sprained near the top....all I paid for was the antibiotic and pain medicine;-) Everyone at both facilities are SUPER kind, caring, and professional. I especially was attracted to them because they help our stray cat and dog problem in Tracy by spaying and neutering at least 10-30 homeless cats/dogs per month for our animal shelter....also SUPER nice folks.