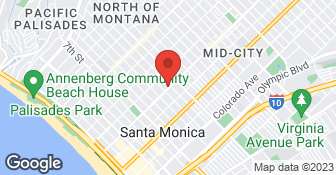 Stanley Pest Control is committed to bringing you the most effective pest management programs possible. When you work with us, you enjoy all the advantages of a large-scale service provider with the courtesy and consideration of an operator owned business. Our services are designed to accommodate a wide range of clients - from homeowners to large commercial structure managers. When you need your pest issues taken care of promptly, call Stanley Pest at 323-937-3819 or 1-800-566-2505!

ABC Bee Control is an unreliable company owned and operated by an individual that does not put the client first. Their website states...and I partially quote because the picture cover some of the text, "We guarantee every bee service and you ...will receive an outstanding warranty." Well the owner and a worker showed up on my property to remove a swarm. After speaking with him he ensured the bees ...

I called Ryan he was not far away and said he could come and would be here in one half hour. He came as promised on time. He answered all of my questions we both decided to make sure we could save the bees. His co-worker removed the queen and the swarm followed. He was pleasant and took care of the problem.

I had a superb, excellent experience with ABC Bee Control. Ryan, the owner, was on-site the entire time. He explained the process when he did the inspection and walk-through the prior day, and did exactly what he said he would do. He and his associate, Cesar, then inspected the rest of the property for signs of other hives, etc. They did a fantastic job, and I'm extremely pleased with the service....

DESCRIPTION OF WORK
I needed a well-established, very large, honey bee hive removed from a house that had been sitting 8+ years. The bees were well established under the roof, along a window alcove, that had become badly deteriorated over time, and with bee activity.

It's Labor Day and the owner, Ryan McGuire, answered the phone.  He said he would be at our home within 1 1/2 hours, and he was.  He explained that what we saw was a swarm, not a hive.  They like to save the bees if they can (he had two hives in his truck from earlier today), but this swarm was hanging on a branch over our pool, and there was no way to get to it to save the bees.  So, they had to ...

DESCRIPTION OF WORK
Removed a swarm of bees from our pine tree in the back yard.

ABC was contacted by phone and made an appointment for the next morning. They arrived promptly and in 15 minutes had diagnosed where the bees had made their hive and the best place to break into it. I say break in because the hive was in a closed area of a parapet roof. I watched the technician remove about 80 pounds of hive and honey from inside the wall. Then the area was sprayed to discourage r...