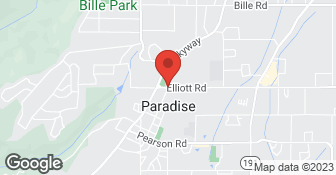 Went okay, but destroyed 3-way wiring that was previously working in the kitchen and then refused to try and fix the switch wiring unless I paid him $120/hour to diagnose the issues caused by his work. Would not hire again. There are plenty of other electricians in the area, and who charge for less.

DESCRIPTION OF WORK
Installed LED Can Lights in Kitchen

Home owner had removed the existing light before we arrived. Was unable to verify that the switching actually work prior to his removal of the light. Was not told of the three way problem until after the new lights was installed. When the homeowner was told that the repair would add additional time/labor to the job he said he didn't need the three way to work any way. Then a month later he called ...
C

Did not fix the outage issue after 2 gentleman looked for 2 hours. Received my estimate for further work needed, but then I was charged $80.00 for service call. I had asked when I scheduled the appointment what the service fee was, and I was told that it was a free estimate. He explained to me that he would normally charge more for the call, which was odd since estimate was supposed to be free.

DESCRIPTION OF WORK
Troubleshot for issue with outlet outage.

Mr. Keith and his son came to install a lighted fan in one of my bedrooms. I had attempted to install the unit myself but when I took down the original light fixture I discovered that the wiring had been charred. Upon investigation by Tom we found out that the wiring had been charred by someone, prior to my owning the house, had used an inappropriate blub wattage. So after all that the light fixtu...

DESCRIPTION OF WORK
Installed a lighted ceiling fan in a bedroom.

The main reason for this review on Mr. Keith is my concern that others may fall prey to his dishonesty. He gave us an estimate cost of $10,500 up to $12,000 for the cost of work needing done. We were shocked, however, we assumed he was a professional and knew what he was talking about. It was after we caught him in several blatant lies we had two other bids given by licensed electricians. Both bid...

DESCRIPTION OF WORK
#1 Talked about himself constantly #2 Provided outrageous bid #3 Failed to show up at 3 scheduled different times #4 With only authorization for assessment/explore at job site, Tom Keith came in (unsupervised) and began unprofessional demolition. Again, without authorization. #5 Upon the attempt to end any negotiation of services, Mr. Keith became increasingly hostile.

My main concern is not to intentionally bash him as a person but my intention is to protect whoever goes on Angie's List to beware of this fellow. I feel that he's seen us as vulnerable and took advantage in a big way of our situation. I'm glad that we wised up before we got in too thick with him. We were redoing our condo. We were actually putting everything out and redoing everything. We hired t...

The actual time spent on this project was 11 hrs.. including prep time , buying materials and pulling permits. Total cost to me for the materials and permit, at the, was $968.72. When they said they wanted to put things on hold and they did not explain why, I agreed to return all the materials, cancel the permit and button everything up, which took even more time. They did not inform me of their r...

Service and repairs of electrical systems in the home or office. Troubleshooting existing systems. Lighting design. Whole house fans, ceiling fans, recessed lighting, switches, outlets. If it's got wire and electricity I work on it.