Pool and Spa Service
Mulch and Topsoil
Gutter Cleaning
Excavating
Licensing
Bonded
Insured
All statements concerning insurance, licenses, and bonds are informational only, and are self-reported. Since insurance, licenses and bonds can expire and can be cancelled, homeowners should always check such information for themselves. To find more licensing information for your state, visit our Find Licensing Requirements page.
Business Details 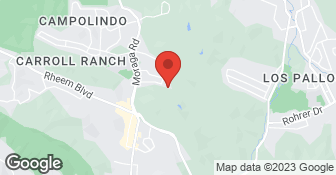 At Bay Area Drainage, Inc. customer satisfaction is a big part of our product. For new construction or retrofit, home or commercial, we build the finest systems. Our seasoned employees are committed to high quality workmanship. Team members have many years of experience building drainage systems....

All Seasons has provided quality construction services since 1993. In the past several years the company’s focus has become foundations and drainage – areas that are particularly important when you consider the age of the homes in the area, the abundance of hills and California’s winter rains. Proper retaining walls, concrete application and drainage systems are critical to keeping your home protected from rainfall, ground water and runoff. Replacement of old, failing foundations is critical to keeping your home safe and still standing after the next big earthquake. All Seasons’ experienced foremen supervise every job and ensure that all work will stand the test of time and mother nature. We build beautiful decks, too! Additional DBA ASC Berkeley Inc.

Specializing in repairs, sales, and service on well pumps, sewage pumps, sump pumps, pump motors, and turbines submersibles! We guarantee your satisfaction and we won’t leave until the job is done right. We pride ourselves on the quality work we provide, while delivering great customer service! Check out our services offered and call or click to schedule a free estimate today!

It took a while to schedule, but once the job started it went as quickly as the weather permitted.

DESCRIPTION OF WORK
Install French drain on uphill side and unclog an existing drain pipe on downhill side.

poorly - a waste of extensive time.

DESCRIPTION OF WORK
Bay Area Drainage responded to a drainage need we had in front of one of our condos back about 1998 and did very good work on a french drain; I saved their paperwork to use them if we had another need recently we had a drainage problem at a low-lying sidewalk in front of one of our other units, so i was eager to contact them; I called and got no answer so left a voicemail; no one responded so after a couple of days I called again and spoke with Mara, who set up an early morning appointment for someone to come out and meet with me. (Note our location is very close in town to their business address -- Moraga.) I took time off from work that morning to meet with the rep who did not show up; I phoned in and had to leave a voicemail, which was irate. Immediately -- as I was backing the car out of the driveway to go to work late -- the guy showed up. He was not in a good mood, so he must have overheard my irate message. I composed myself and spoke politely with him -- his kids were in the back of his car, so i don't think he had prepared for this meeting. I walked with him over to the location and he said he could tell from looking at the dry water marks what the problem was. I told him of another contractor's suggestion and he said he agreed with it, and that was it. I said good by as I raced to my car to get to work late and he mentioned his office would send me a proposal in a couple of days. nothing came, so I called his office yesterday. No answer left voicemail. No response. Called again and spoke with Mara who said she had emailed me the proposal several days prior. I explained I had not received it. She verified the email address with me and it was wrong. We corrected it. She said she would re-send the proposal. this morning still no proposal so I called back and spoke with her again; she said maybe it went into spam because she sent it to the correct email address. While she was on the phone we checked spam and it was not there. We verified the email address again and I gave her a second email address. I also gave her a fax number. 1/2 hour later still nothing so I called back; she was polite but said the phone had been ringing off the hook and she had not had a chance to get to me. I too was polite and asked for her email address and told her I would send her an email that she could respond to and in the email I would give her my phone number, 3 email addresses and fax number. Sent that and have heard nothing back; will not try again because I know I will never hear from them. The problem here was professionalism; they either should have told me they were too busy to handle my situation or too annoyed by my initial angry attitude. Gretchen Trupiano 925 808 9026

Wayne was quick to come out and provide a quote. However, his work backlog precluded getting the job done in my desired timeframe. The price seemed fair, although the quote was based on a gravity feed to the street, which would not have been possible. Quote also included installation of rain gutter drains, not originally discussed. A follow-up discussion would have been required if the work was to...

DESCRIPTION OF WORK
Provided quote only for installation of french drain.

The job went very well. They had to carry the dirt being removed from inside the crawl space to the outside of the house using 5 gallon buckets. This was tedious backbreaking work. They filled up 4 large dump trucks to cart this dirt away. Than they had to carry in rock using the buckets. They were very careful to keep everything as clean as possible. They put plastic down everyday and cleaned up ...

DESCRIPTION OF WORK
Installed Fench Drain in the crawl space and down the outside of the house to the street .

They examined all the house drains, not just the French Drain; replaced drain from yard sump to street with minimal disruption of landscaping; Returned to repair buried sprinkler line which had been penetrated by their iron probe. Later added change order for drain from downspout under sidewalk to sump at high cost.