Plumbing
Handyman Services
Electrical
Finished Carpentry and Woodworking
Water Heaters
Natural Gas Lines
Kitchen and Bath Remodeling
Phone Wiring
Licensing
Bonded
All statements concerning insurance, licenses, and bonds are informational only, and are self-reported. Since insurance, licenses and bonds can expire and can be cancelled, homeowners should always check such information for themselves. To find more licensing information for your state, visit our Find Licensing Requirements page.
Business Details 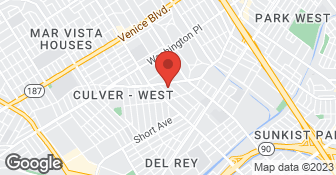 Downey Plumbing, Heating and Air Conditioning has built a reputation for excellence from our 80 years of professional service to commercial and residential properties in Southern California. We are committed to being your one stop plumbing, heating and air conditioning provider in and are confident in our knowledge and expertise. We offer the best possible service at a price you can afford, while maintaining a professional standard our customers have come to appreciate and expect. Even more importantly, no plumbing or HVAC job is beyond our range and we can take care of any issues you may have including installation, routine upkeep and major emergency repairs. Residential and commercial services.

E.L. Electric is family owned and operated with over 26 years of service and experience in the industry. With a great legacy of management, customer service and repeat business, we've set the standard for electrical services on residential and commercial projects. As well as new constructions and renovations. With minimal waiting time on permits and corrections, we have a history of achieving on time project completions. Now that our 30th anniversary celebration is around the corner, we are raising the standard once again as a professional and trusted business, We look forward to servicing your electrical needs. Thank you in advance for your business. For emergency calls only after business hours please call 818-644-3777

Moti Buchboot Electric is a Residential, and Commercial electrical company located in Los Angeles's South Bay. With over 25 years experience in the electrical industry, I am capable of handling any type of electrical work you may need carried out. I provide prompt affordable quality service to our customers in a pleasant friendly like manner. I take pride in my work and enjoy what we do. Customer satisfaction is my number one goal.

After my efforts to repair a leaking toilet went nowhere, Rick came on short notice and pretty much saved the day. Rick has worked for me before repairing and installing some other fixtures but it wasn't until this repair job that I realized that he was listed in Angies (He had been recommended by friends that he has worked with for years). Very knowledgeable, nice and easy going guy for someone s...

DESCRIPTION OF WORK
Repaired a toilet that was beyond the repair of this do-it-yourself'er.

I had used them before. They are very reliable and honest. They were very competent.

DESCRIPTION OF WORK
They installed my appliances.

Rick and Travis were very pleasant and professional. They worked efficiently and cleaned up after themselves. The work has been done to my satisfaction and I would highly recommend them. I have additional work for them to do in the near future. Rick was fair in pricing the job.

DESCRIPTION OF WORK
Rick and Travis performed a variety of tasks: They had to install a bathtub in a cove in a 1930s house. There was no way to drop the bathtub in, so they had to break the outside wall and slip it into place. They had to re-construct the outside wall in preparation for it being plastered. They connected the plumbing related to the bathtub They reconnected a toilet They replaced a waterheater

Rick provided very friendly, professional, and reliable service. He is great to work with, he gave us a very good bid and once the job had begun they had realized that the job was a bit more complex then they had first anticipated. Rick worked through all of complications with diligence and efficiency. His team showed up early and ready to work every day. Rick stuck with us on a hard job and did n...

DESCRIPTION OF WORK
All of the main plumbing underneath the house and through the back yard to the city line needed to be rerouted and replace due to roots and crushed pipes. I would say about 60 feet of pipe.

Rick's business demeanor is a good blend of professional and casual. He came to meetings and work, on time and prepared. His estimating was accurate and communication about changes to the work in progress was very good. His skill set was also excellent. The plumbing, electrical, drywall repair, painting prep and and painting, carpentry are all very good and a far cry better than whoever had done p...

DESCRIPTION OF WORK
Install a garbage disposal & a portable dishwasher: Plumbing, Electrical, Dry Wall and Paint Sounds like an easy job, right? But, the age of my residence, poor workmanship of previous repairs and a dozen other sorted details made this job, especially the dishwasher part of it, a custom installation that could not be accomplished without creative problem solving. That's what was so great about working with Rick, he gave a lot of thought to my project even though it wasn't a big money job. My kitchen counters and cabinets aren't deep enough for a dishwasher. I bought a nice portable, but I wanted to install it semi-permanently in the utility room next to my washer and dryer. A portable dishwasher is designed to be rolled up next to the kitchen sink. It has single fitting that attaches to the faucet and dumps into the sink. My original intent was to have a plumber replicate the inflow/outflow box that's behind my washing machine and then slice and dice the dishwasher tubes, so they would resemble the inflow and outflow of the washing machine. That's the job I described to Rick and that's the job Rick originally quoted on. But the next day Rick called me with concerns about the slice and dice part of the job. He made a pretty good case for doing the job differently - including the likelihood that I would void my warranty and increased the risk of a leak in the future. He suggested that we buy and install a small sink and a single faucet so that the dishwasher could be hooked up as it was intended by the manufacturer. Rick found me a sink at a discount boat supply company. I purchased the sink for $60 including shipping, so Rick did not take a mark up. He couldn't find a good value on a the kind of faucet we were looking for, so he bought something bigger and reworked it until it was a perfect fit. And he set the sink and faucet into a nice plywood shelf that he made. .

General Information
Free Estimates
No
Emergency Service
No
Warranties
No