A Rated | 102 Reviews
Request a Quote 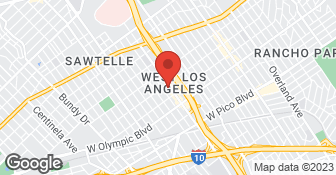 We try to a gain our customers for life. Our goal is to provide plumbing and heating services to the community of Westside, California with honesty and reliability. Our plumbers do not work on a commission basis, so they have no incentive to oversell. We give our clients options and let them make the decisions that are best for them....

They are always honest and reliable. Another plumber had been out on Christmas day and messed up the job, got their snake stuck in the drain and couldn't do it, then had the nerve to quote an outrageous price to come back the next day. So I called JoMi and they took care of it very reasonably.

I'm a property manager and one of my homeowners likes to use Jo-Mi.  She has recommended this company to me several times so I decided to call them for a common area problem in her building.  The first time I called, they said they were too busy to come out.  When a second problem arose a month later, I called them again only to be told that they didn't have time, yet when my homeowner called them...

DESCRIPTION OF WORK
This company told me twice that they were too busy to take new appointments.

Terrible! Pedro arrived on time but made a mess in our shower. Instead of a slow drain we now have a clogged shower! He did not even attempt to fix it, he told my wife we should call and arrange for someone else to come and repair the line!

I will addressed each matter separately. I have not the bills for most of the work yet. Matter 1 involved installing a a new toilet and shower head that we bought. The plumber did a nice job of installing the toilet. Matter 2 involved clearing two plugged low flow toilets  and checking the guest shower. The plumber cleared both toilets promptly using a snake like instrument built into a long pole....

Whenever I have a problem with something, they come out. They're very responsive. If it's difficult, the head guys come out. If it's something minor, they have a number of different workman. They're very good. They're very polite. They clean up everything when they're done. They send you a bill afterwards. I like them.

DESCRIPTION OF WORK
We use Jo-Mi Plumbing.

General Information
Bonded
Yes
Insured
Yes
Free Estimates
Yes
Payment Options
Check, Visa, MasterCard
Senior Discount
NO
Emergency Service
Yes
Warranties
Ask for details
All statements concerning insurance, licenses, and bonds are informational only, and are self-reported. Since insurance, licenses and bonds can expire and can be cancelled, homeowners should always check such information for themselves. To find more licensing information for your state, visit our Find Licensing Requirements page.