Vacuum Cleaners
Appliance Repair - Small
Floor Cleaning and Waxing
Sewing Machine Repair
Carpet Cleaning
Licensing
Insured
All statements concerning insurance, licenses, and bonds are informational only, and are self-reported. Since insurance, licenses and bonds can expire and can be cancelled, homeowners should always check such information for themselves. To find more licensing information for your state, visit our Find Licensing Requirements page.
Business Details 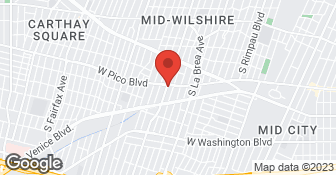 six employees including three full time, factory certified technicians. We accept cash, debit cards and most major credit cards. We offer lay-a-way programs for vacuum purchases. We have ongoing bag and belt specials (buy three and get one free). We offer trade-ins on old vacuums....

We are a stone restoration provider specializing natural stone, tile and concrete care. We provide you with the over 26 years of field experience, unmatchable skill levels, and exceptional quality services needed to make any surface look better than it ever has before. The restoration and care of natural stone and tiles requires the skill and knowledge of master craftsman. Our professional staff can restore and preserve your natural stone and tiles to a true factory finish with environmentally friendly, patented products and exclusive systems.

Over 12 years of experience in carpet and tile cleaning. We offer quality cleaning services at affordable rates. Call us today to discuss your needs!

For over 29 years, Valley Carpet Cleaning has been keeping homes and businesses in San Fernando Valley, CA fresh and clean. Whether it’s tile and grout, carpet, hardwood, rugs or upholstery, we’ve got you covered. No matter the job, our experienced staff has seen it before and can help you deal with it now. We don’t shy away from the even the toughest projects! Upholstery and carpet cleaning in San Fernando Valley, CA are important parts of keeping your space looking its best. More importantly, however, routine professional cleanings will eradicate germs and extend the life of your materials. Our team leverages top tools and techniques to leave your floors and upholstery looking, feeling and smelling their freshest. No matter the size of your space, the nature of its use or the last time it was cleaned, we guarantee results that are undeniable. Take a look at just a few more reasons our customers recommend us to their friends and family for thorough and exceptional carpet cleaning in San Fernando Valley, CA:

I couldn't agree more with all of the bad reviews Boulevard has received. I have given them multiple chances?at least four or five. They are slow, slow, slow and NEVER meet their commitments for when the machine will be ready. I get their excuse that parts may be difficult to get from Dyson, but even after they get it in shop they will make no effort to expedite the repair even after they have rep...

n id OKI've used them befpre but this time I changed my mind because this is how they do business: You take in the vacuum.  They tell  you to call them the next day for a quote. They ask you if you want a new vacuum. They say the labor charge will be either $29/hour or $59 depending on the complexity of the vacuum.  If you don't like the quote, you can take back the vacuum at no charge. I called t...

The employee I spoke with asked me to leave the vacuum so that they could look at it and diagnose the problem.  Since the shop was empty and i saw at least one other employee, I asked if we could turn the vacuum on with the thought that he could determine whether it was the hose or filter needing to be replaced, or something more complicated that would require a more in-depth diagnostic.  He told ...

DESCRIPTION OF WORK
After unsuccessfully troubleshooting a suction issue via phone with Dyson they provided me with a few recommended repair places, including Boulevard.  I brought my Dyson into their shop on a Saturday afternoon and explained the issue, as well as what the Dyson person thought might be the problem.

See above, a truly horrible experience. I will never go back there. I told dyson the same thing and they found me another dyson authorized facility to use. Very unprofessional. I advised dyson to thoroughly review this place as I felt that they were highly incompetent.

DESCRIPTION OF WORK
I took my dyson dc-28 in for a warranty repair on approx. November 11th, and at the time I was told that once the tech had a chance to look at it I would receive a call. The call never came. So I called 5 days later and told the guy that works on dyson wasnt available, and he would call back. I did receive a call a couple days later and told the part had to be ordered, which was fine. I was also told my vacuum needed service, which I agreed to although I had only used the vacuum a total of 8 or 9 hours the entire year. After thanksgiving I called on the vacuum, and was told the part wasn't received. I went down to talk to the repairman after 4 weeks to see if it was ready, and he wasn't in. After 6 weeks I called dyson to complain about the length of time for the repair, and they had a supervisor call the manager, Ron. Ron stated my vacuum would be repaired that week, but couldn't give them a firm date. By the Friday of that week, I called and spoke to Ron myself, and he told me to come down and pick up the machine, and that it was ready. I picked up the machine the Thursday before Christmas after a long, drawn out, condescending and unnecessary conversation with Ron about how complicated the vacuum and repair was. When I returned home from the holiday the following week, I went to use the vacuum and IT DIDNT WORK! The head did not adjust to the floor setting, the floor setting light kept flashing, the wand would not expand from the handle at all, and there were numerous scratches on the machine. To add insult to injury, I paid $69.99 for servicing the machine! I believe that was the worst part in that I paid for service and they didn't even check the machine, otherwise they should not have let it out of the shop. A truly disappointing experience.

They have parts for nearly all vacuums in stock.