Electrical
Lighting
Ceiling Fans
Landscaping - Lighting
Lawn Irrigation
Licensing
Bonded
Insured
All statements concerning insurance, licenses, and bonds are informational only, and are self-reported. Since insurance, licenses and bonds can expire and can be cancelled, homeowners should always check such information for themselves. To find more licensing information for your state, visit our Find Licensing Requirements page.
Business Details 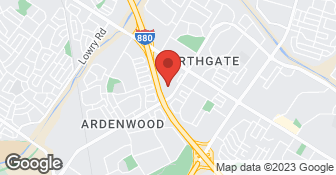 Receive high-quality services from a family owned and operated company since 1987, Budget Electric works with residential and commercial customers across the Bay Area to help them with all of their electrical needs. Save time, money, and energy while upgrading your property's electrical systems. Keep your electrical systems working like they should with electrical services from Budget Electric. From panel upgrades to troubleshooting and repair, we do what it takes to improve the way your home uses power....

Fast Handy Electric is locally operated and has been serving the Bay Area since 2012. We value our customers and the service that we provide. Our friendly and reliable electricians are experts in electrical systems maintenance, new installs and upgrades for your home, commercial or industrial projects.

We are an Electrical Contracting Company providing top quality electrical services to South Bay, East Bay, and the Peninsula! Dave Lee, the owner of Dalcon Electric, started doing electrical work in the San Jose area over 30 years ago. Then, in 1993, he started Dalcon Electric in San Jose. With over 30 years of experience in both residential and commercial work, we take pride in our expertise and professionalism. We always give you a fair price and can often recommend ways to save you money on your electrical job. We are family owned and operated company! We are also licensed, bonded, and insured! Give us a call today! You’ll be in good hands! Ask about our Angie's List coupon and senior discounts. Award winning. Certified Copalum Installers.

Michael was very professional and called ahead when he hit traffic and was going to be late. He also identified that I had incorrectly rated breakers installed in my panel and recommended replacement. The estimate was free and when he came back to do the work, he was prompt, courteous, and did the work quickly and efficiently. He also informed me of a 48mo warranty on the new breakers.

DESCRIPTION OF WORK
I needed to replace a 220V dryer receptacle

This was a $49 big deal purchase. It was okay, not so bad, not so good -- nothing special about it. I didn't have any electrical problems. I think a couple of my cords were stripped and I was a little worried. He didn't tell me that there were any problem. He just came and checked a few things . Then he said everything was good and there was nothing major at all as far as problems. $49 was not too...

DESCRIPTION OF WORK
It was for a whole house electrical inspection.

I purchased a 2 recessed light service deal from them.  The guys never called or showed.  I tried reaching them a few times and managed to speak with them once.  However, they were a no-show for the appointment and never bothered to contact me again. I never got my money back and they didn't provide the services promised.

DESCRIPTION OF WORK
Absolutely nothing at all.  They were supposed to install two recessed lights.

The contractors work was excellent.  There was some miscommunication between what I thought the deal entailed and what he thought it did.  I was under the impression he was to be here for two hours so I gave him various projects to work on.  When he was done, he handed me another bill for the "extra" work.    In the end, he did not charge me which I thought was appropriate but he was a little diff...

DESCRIPTION OF WORK
Added wire nuts to some electrical connections.  Rewired an exterior light with the proper housing.

Scheduled 10 to 12 window, no showed and was not able to reach them until 5pm that day. Rescheduled and owner came out and he arrived an hour late stating he was just here to "do an estimate" for a job we had paid for weeks before. We then rescheduled a THIRD time.  The technician arrived 45 minutes after the agreed upon window, did not have the parts required, and took an hour to do a job that th...