Roof Cleaning
Apartments
Siding
Roofing
Gutter Cleaning
Licensing
Bonded
Insured
All statements concerning insurance, licenses, and bonds are informational only, and are self-reported. Since insurance, licenses and bonds can expire and can be cancelled, homeowners should always check such information for themselves. To find more licensing information for your state, visit our Find Licensing Requirements page.
Business Details 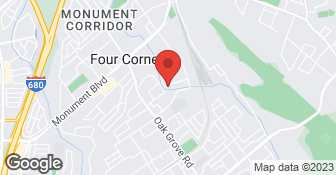 We are committed to a responsive delivery of flawless craftsmanship combined with the industry's best customer service. we bring proven expertise and time tested techniques to every job site. while most companies rely on sub-contractors for major parts of a job, we do not. we maintain control over quality and scheduling of the work performed. cleanup crews work daily to keep the job site clean, safe and usable at all times....

Locally owned and operated and in business for 28 years. We specialize in Gutter Cleaning, Pressure Washing, Roof Cleaning, Solar Panel Cleaning and Pressure Washing. We do great work and pride ourselves on cleanup and professionalism. Proud winner of the Angie's List Super Service Award for 3 years in a row! We are a member of the BBB. We will blow out the gutters, pressure wash them, and then put pressure down the downspouts to ensure that everything is flowing correctly. Please call us today at (925)330-6299.

My specialty is to have a good looking landscape all year. I have 7 years of experience doing landscape maintenance.

DESCRIPTION OF WORK
They are a roofing company. They removed the old roofs, replaced damaged wood and applied new roofing.  However there were several minor but bothersome problems. I am a real estate property manager and am actually a tenant in the property that required the new roof. First during the work a worker stepped through the roof and did significant  damage to the interior ceiling.  Mr Bob Jones, owner of Airtight construction,  first claimed that the tenant in that unit told him that the damage was there prior, which was a lie, then he told me that Airtight construction doesn't do interior  work so I had to hire another contractor to fix that damage. Next there was 2 unacceptable area of workmanship.   When I called to complain I didn't get a return call for about 2-3 weeks.  when nothing was done to fix these problems Mr. Jones said he drove by and fully agreed with my complaints, He said he would have his workmen come by within the next week, it has been about 1 month since that last conversation and the problems still exist. Now Mr. Jones does not return my calls. Also with the scaffolding they broke my neighbors solar lighting and yes nothing has been done about that either.  Finally it has been about 3 months since they performed their work and I am still picking up the old roofing material from my yard.