Water Heaters
Plumbing
Drain Cleaning
Sewer Cleaning
Natural Gas Lines
Septic Systems
Licensing
Licensed
Bonded
Insured
All statements concerning insurance, licenses, and bonds are informational only, and are self-reported. Since insurance, licenses and bonds can expire and can be cancelled, homeowners should always check such information for themselves. To find more licensing information for your state, visit our Find Licensing Requirements page.
Business Details 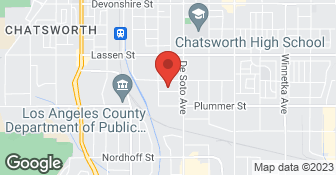 Full service plumbing specializing in the installation and service of tankless water heaters. Office closed on Saturdays but techs are working....

HERE AT 20/20 RELINING & ROOTER WE PROVIDE THE BEST OF US IN SATISFYING OUR CUSTOMERS TO DOING A HIGH QUALITY WORK AT SUCH AN INCREDIBLE REASONABLE PRICE. WE HAVE BEEN IN BUSSINESS SINCE 2018 TILL NOW AND MUCH MORE YEARS TO COME. WE ARE A FAMILY OWNED BUSSINESS THAT RELATES TO THE COMMUNITY AND GIVES BACK TO IT ASWELL. WE OFFER VARIOUS DISCOUNTS.

Team Rooter offers quality rooter and plumbing services to our customers in the greater Los Angeles area. This has been our passion! For this reason, our TEAM of professional plumbers and technicians use the latest equipment and state-of-the-art technology to find, diagnose and repair rooter and plumbing problems for our residential and commercial customers. We treat you like part of our TEAM; more like a friend or a neighbor and we aim to bring you the best plumbing experience possible. Whether its a clogged drain or a main sewer line replacement, when you need your job done quickly and correctly at an affordable price; contact Team Rooter . We are your top choice for drain cleaning, sewer repair, waterline repair, and more.

Ortiz specialty sewers is a plumbing company. We have the experience and dedication! We guarantee your satisfaction, and we won’t leave until the job is done right. Call or text to schedule a free estimate today! we serve all of Los Angeles County

The technicians that installed the water heater were excellent. However the office staff wasn't great. The office staffs attitude towards my calls and the questions I have leaves a lot to be desired. It seems to be a we'll get to you when we get to you attitude. I’m a little worried that no one seems to know what’s going on or is interested in solving the problem. The owner wants to send me a cert...

DESCRIPTION OF WORK
Tankless Water Heater Solutions came out to do an estimate on installing a new water heater. I let them know that the model I wanted installed was a TK4-Series from Takagi Water Heaters. They took out the original tankless water heater and installed a new water heater, which I thought was the one I'd requested. It turns out it was actually from American Water Heaters but said it was powered by Takagi. I reached out to American Water Heaters, but got Takagi on the phone. No one was able to answer what the group was doing in terms of having all of these water heater companies under one umbrella company. It almost seems like the umbrella company, AO Smith, is trying to corner the market for water heaters. No one from any water heater companies under AO Smith was able to tell me much about the water heater that was installed in my home. It had two different model numbers which also complicated things. The model numbers weren't up to date and were obsolete. The company that did the installation for me, Tankless Water Heater Solutions, are associated with American Water Heater. American Water Heater offers awards or compensations if a company sells a product under their name. This particular tankless water heater came with a remote so you could adjust the temperatures and it also monitors the functioning of the water heater. That way if something went wrong it would automatically change the temperature and let you know that it wasn't functioning properly. They were supposed to install the remote inside of the the house, according to the manual. They ended up installing the remote twice outside of the house. Once underneath the water heater in the crawl space, which I said didn't seem like a good idea because it was exposed. The other time they put it inside of a box with no ventilation, on a wall outside near the water heater. They refused to put the remote inside the house and said if I just left it in the box outside they'd extend my warranty. I wasn't okay with that because the manual stated it needed to be inside. I believe they didn't want to do that because it would mean running wiring underneath the house or through the attic. They also didn't do any other work outside of removing the original water heater and installing the new one. The area where the original water heater was, which was partially installed inside the wall, is still exposed. This company is supposed to be certified and should be able to install the water heaters and do the electrical work. After the water heater was installed they sent out an electrician. I asked them why they were sending an electrician as they should have been able to do that work since they're certified. They said he would explain everything to me. Once the electrician got to my home I asked him what he charged and he indicated $150 per hour. I said thank you but that's to expensive and had him leave. I tried to ask where they'd purchased the water which is strangely enough from American Water Heaters. I asked him if he had the invoice of his purchase of the water heater. He ended sending me my own invoice which didn't help at all.

The member has been unreasonable throughout the process and is very forgetful when it comes to in person and phone conversation. As time goes he comes up with new request, such as repairing his stucco that was behind his old water heater. When a water heater is changed it is not customary to paint or repair whatever is behind the old heater, we are plumbers not painters. He only came up with that ...
A

Ted and his office staff are great!! His plumbers are knowledgeable, timely and professional. We would (and do) call them back for all of our needs.

DESCRIPTION OF WORK
I have used them four times now and have been happy every time they have been here. Ted is professional and his plumbers are great! They have installed our tankless water heater, which we love!! and, returned to add re-circulating lines for our new addition and other maintenance services.

DESCRIPTION OF WORK
Great technicians for service and prompt responses to meet my needs!

Thanks for taking time out to review us, we appreciate it. We're glad we could help out.
A

$199 - That's the price of a service call. He didn't try to sell me anything and replaced three screws that were missing.

Thanks for taking the time to review us. I'm glad we were able to get all back in order.