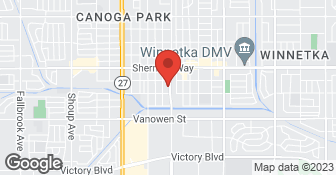 We help homeowners save a lot of money with our beautiful energy-efficient windows and doors, which are rated the best in security and noise-prevention, and we guarantee the lowest price! All installations are performed by experienced craftsmen for a professional finished look and all quotes are done virtually so we don’t have to visit your house to send you a detailed quote. Call now to schedule a Virtual Window Consultation and take advantage of our $500 OFF (UP TO 5%) promotion and we’ll take care of the rest! “Making neighbors jealous since 1992”

Call now for our Angie's List only offers. Everyone wants to improve the look of their home and its energy efficiency. While many California residents share these goals, they don't know where to begin to make these goals a reality. Are you looking for a window installation and exterior coating contractor company that is fair, honest and hard-working? What about technicians who are always on time, stand by their word, and have won the Super Service Award in all of these categories, Approved Contractor measures up. Whether you have a specific window in mind (we carry all lines of windows) or simply wish to cut down your energy bills, our window installment services are exceptional. Our texture coating services are sure to leave you loving the look of your house again, will keep the inside of your home cooler, and are able to withstand all kinds of elements. License #952272

Progressive Insulation & Windows was founded in Chatsworth in 1978 and has grown into one of Southern California's leading replacement window and insulation companies. We stand above many of our competitors because of our commitment to provide excellence in the installation of our products. Though we now have more than 70 trained installers and sales reps, we still do business in the same customer-centered tradition that propelled us to success in our early days. We are still a family-owned and operated business that truly cares about the customer experience before, during, and after installation of any of our products.

DESCRIPTION OF WORK
Took my deposit and did not perform services.

Had problems at the start. They sent out an inexperienced salesman who made several misrepresentations and got window measurements and total cost wrong. Absolute did apologize and sent out someone experienced and made the necessary corrections. I was given a 4 to 6 week delivery and installation date. My windows were installed 4 months later, only after I contacted them several times to complain. ...

Absolute nightmare is what they should be called. They took measurements in March (and collected $1,000), and the contract said I should have the windows in 3-4 weeks. By June I was still without windows. When they did bring the windows, they were the wrong size. Not once did they call to follow up, not once did they apologize for the inconvenience. By August, they brought the windows, installed t...

DESCRIPTION OF WORK
Install total of 5 custom windows in my townhome.

The workers were very professional & prompt. There was one small mix-up. Two of the windows had the wrong grid pattern, but the company recognized the problem & has agreed to replace them. Overall we had a very good experience & have even hired them to texcote our home.

DESCRIPTION OF WORK
Replaced existing windows & made 2 of them into sliding French doors- 13 windows in all. The existing slider was reduced in size from 8 feet to 6 feet. The patching of the stucco (heavy lace stucco) was expertly done. The replacements windows are vinyl, dual-paned, & have custom grids. We love them! Outside noise is much less, even though we live near a railroad crossing.

SO FAR IT'S AN 'A' BY THE WAY HE SOLD IT TO ME. HE TOOK THE TIME TO HAVE FOUR DIFFERENT TYPES OF WINDOW GLASS, AND SHOWED ME THE DIFFERENCE BETWEEN THE WINDOWS, AND THE HEAT. HOW IT PENETRATES MOST WINDOWS, AND HOW NO HEAT CAME THROUGH THESE WINDOWS AT ALL. I THOUGHT IT WAS VERY GOOD, BECAUSE IF YOU HAD ANY HEAT THAT WOULD HIT A ROOM, THIS WOULD BE THE WAY TO GO. IT PROVIDES GOOD INSULATION. IT WO...

DESCRIPTION OF WORK
THEY INSTALLED TWO LAUNDRY ROOM WINDOWS, AND THEY CAME WITH A MEMORY SCREEN.