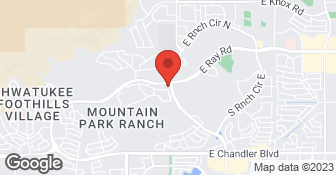 Triple S Construction LLC and Ontime Builders LLC are licensed, insured and bonded contracting companies. Both are owner operated with over 20 years experience in the industry. We are highly proficient in all aspects of remodeling and specialize in custom bathrooms, kitchen remodels and additions. Our expertise covers most categories of remodels and renovations.

Welcome To Interior Remodeling By Simmons. Our goal is to provide every one of our remodeling clients with outstanding quality, flawless workmanship, on-time completion at a competitive price. We are proud to have accumulated over fifty years of experience remodeling kitchens and bathrooms, building fireplaces, and using our finish carpentry skills throughout the state of Arizona. Be assured that any sub-contractors used, will share our same mission statement! Interior Remodeling by Simmons is a 15-year member of the Central Arizona Better Business Bureau and we are happy to provide you with references. We want you to be as proud of the end product, as we are of the quality work we put into making your dream a reality.

Since 1978 Kirk Development Company has served our Arizona clients with a sincere concern for their needs and interests. We provide complete design and build services for remodeling projects and custom homes and no matter what the size of the job, my employees and sub-contractors know what you and I both expect: honesty, 100% effort, on-time completion and no surprises! We believe that constant communication with you, the client, is essential throughout the project beginning with the first exploratory meeting, and you can count on being fully informed every step of the way. Our attention to detail and concern for quality are the reason that past customers are the source of over 60% of our business.

DESCRIPTION OF WORK
Resized small cabinet above refrigerator space to allow for larger appliance. Had some issues with communication and required fixing some flaws in their original work. After everything, work is solid and looks great. Cost was in line with other bids. I would consider using them again.

It went very well. From the time he came in to give us an estimate until the final walk-through, I knew we were in good hands.

DESCRIPTION OF WORK
The kitchen, living room, and dining room were gutted, and the ceiling raised so that they matched. Extra support was given to the ceiling so that we could have an open concept for all three rooms. The kitchen  door was moved back to allow an extra entrance and the kitchen is huge after he removed a peninsula. He also built arches over the door to the kitchen from the living room, the hutch in the dining room, and two entrances to the wrap-around bar in the kitchen.  New tile was added throughout the house, new carpeting in the step-down living room, and a new air-conditioner in our Arizona room which now gives us an extra room and more square footage. He sub-contracted for lighting, so we have new lights in the ceiling in all three rooms.  There were many more little touches, but he was professional, competent, and easy to work with . Definitely an "A".

It turned out to be a longer process than anticipated due to miscommunication between Mark and I regarding what I was looking for in the finishing process. Mark was very understanding and worked with me through the process, correcting any issues I pointed out. I do feel the need to point out that there was a significant lack of communication on Mark's part keeping me updated with what was happenin...

DESCRIPTION OF WORK
R and R small cabinet above refrigerator. I had to have the original cabinet replaced wit a smaller one to enable a new, taller refrigerator to fit.

MJS has done and is doing a great job for us.

DESCRIPTION OF WORK
MJS Construction are doing 2 big projects for us. They took out the old cabinets and made new ones and installed them. And they did a appliance reinstall.