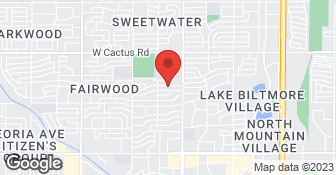 I am an owner operator and do 99% of the work myself. We accept checks and or cash. No credit cards accepted at this time. The company licensed, bonded, and insured. We offer free Estimates....

We appreciate your time for visiting us at Angie's List. We are State Certified and Insured so that you know the quality that you receive will be the best! Centrik Roofing is a family owned and operated business ran by owner Henry Monzon and his son Agusto. Henry began roofing in 1989 were he quickly got promoted into a foreman in a matter of weeks. Eventually his hard work and dedication led him to supervisor and super intendant of several different companies. Eventually, following his passion for roofing on a daily basis, he returned as a foreman and created a one of a kind crew where he learned the trade in a professional matter. When the company he had been working for the last 10 years shut down during the recession. Henry had the skillset, and in 2006, He got his own license to do what he was passionate about. He has taught his son the trade as he is a student in college and also shares a passion for roofs. Today, the same men that were part of his one of a kind crew, are now his foremen and together they all deliver professional customer service providing the best possible work in the field to make their customers the happiest they can be. Call us today at 602-628-3428 or at 602-635-8856 for a free estimate or consultation.

All of our team members have extensive experience assessing building performance and helping you with all your home improvement needs. We excel in rain gutters and skylights. Our goal is to provide you with objective data and cost-effective solutions so that you can make decisions about improving and protecting your home. If you don’t believe please see all the nice things our customers have said about us.

Better View Window Systems is a licensed, bonded and insured replacement window and door installation company in the greater Phoenix area with over 20 years experience. We offer a custom experience including trained Design Consultants that deliver free in-home consultations, professionally trained and licensed installation, and a lifetime warranty on all products installed. We accept all major credit cards, we also have very generous financing options, and we offer cash discounts.

Have you hired BYC Contracting? Be the first to share your experience and help other people looking to hire this Pro.

We are the one stop shop for all your Home Improvement needs. From the front curb to the back fence and everything in between.

We do not work on pools.