Lawn and Yard Work
Landscaping
Lawn Irrigation
Tree Service
Lawn Fertilization & Treatment
Stone and Gravel
Leaf Removal
Pavers and Hardscaping
Landscaping - Lighting
Holiday Decorating
Hauling
Licensing
No License Required for Trade
Insured
All statements concerning insurance, licenses, and bonds are informational only, and are self-reported. Since insurance, licenses and bonds can expire and can be cancelled, homeowners should always check such information for themselves. To find more licensing information for your state, visit our Find Licensing Requirements page.
Business Details 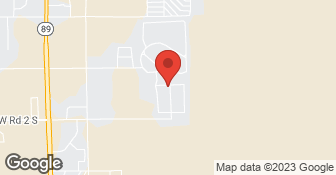 Owner operated. No subs. Cost is determined by the job. No travel charges. No service fees. No extra charge for 24 hour emergency service. Additional winter hours - Mon-Fri 7:00 AM-5:00 PM....

Locally owned and operated. We specialize in home renovations of many types, including bathroom and kitchen remodeling, interior & exterior painting, tile, vinyl, laminate flooring, and more!

Mastera's Landscaping LLC is committed to excellence in every aspect of our business. We uphold a standard of integrity bound by fairness, honesty, and personal responsibility. Our distinction is the quality of service we bring to our customers. Accurate knowledge of our trade combined with ability is what makes us true professionals. Above all, we are watchful of our customers' interests and make their concerns the basis of our business.

Yavapai Landscaping is a full service landscaping company that offers design, installation, and maintenance services throughout Yavapai County and Arizona.

We have been doing business with Fred for over a year. He was coming every 4 weeks for landscape maintenance. In the beginning service and attention to detail were great. Then this last summer of 2012, he didn't show up. No call, nothing. I called him and he apologized and said he was backed up. That's fine, but it would have been nice to have a call. This has happened twice since then. My last se...

He started out really well and then one day he didn't show up. I am having to call him more so when he is coming. I am left in a position where I am not knowing when he will come. I would not know when he was coming unless I called him. He is very personable and he has the capacity to do well.

DESCRIPTION OF WORK
He did landscaping work for us.

At first the service was pricey, but very good. However, I let them go 6 months afer hiring them. They do work that has not been approved, raised the price on me and did work I had specifically asked them not to do. The yard looked great, but in the end I was charged extra for work I had not requested.I hired a new highly rated company on Angie's list. They are cheaper and simply do the work. Fred...

Fred came out on a Sunday to look over the job and make an estimate. The following Friday he and his crew began what was thought to be a one day job but turned into 1 1/2 days. They had to block some old heads and replace/re-position many others. Most valves were OK, but many heads had to be either replaced or adjusted for direction and coverage. Fred is a down-to-earth, old school professional th...

DESCRIPTION OF WORK
Repair nine stations and add a tenth for a garden area.

I had to discharge them because they were unacceptable. He's a good gardener but his punctuality and reliability leave something to be desired. I called the first time he was a no-show and didn't call us to let us know he wouldn't be able to make it. I had to call twice and it went straight to voice-mail. There was a good reason, but he should've called. I told him that and asked that he not let i...

DESCRIPTION OF WORK
They've been working for us for the past 8 months. They maintained our landscaping.