Plumbing
Pool and Spa Service
Natural Gas Lines
Licensing
Bonded
Insured
All statements concerning insurance, licenses, and bonds are informational only, and are self-reported. Since insurance, licenses and bonds can expire and can be cancelled, homeowners should always check such information for themselves. To find more licensing information for your state, visit our Find Licensing Requirements page.
Business Details 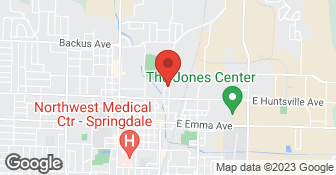 Here at Pride plumbing we can do all of your plumbing needs. We are licensed and insured company that serves all of NWA and some of the surrounding areas. Professional and friendly staff on board that is ready to take on any kind of plumbing problems. We offer same day service but if we are booked we will do our best to get to you within 24hours

Some Kind of Help

ITS Plumbing is dedicated to providing our customers with the best quality and craftsmanship. We are here to build relationships with our customers and communities and to provide our employees with a great place to work. ITS Plumbing is a leader in providing our customers with the highest quality products and craftsmanship in an honest, efficient, and professional way. Our pledge is to create successful relationships with our customers, employees and community by building trust, treating every project with the utmost integrity and exceeding expectations. We look forward to working with you!

I called on a recommendation and was given a very quick appointment. I figured with all the busted pipes in the areas that I might have to wait longer than I did. I called on a Friday and was given a Monday appointment (a holiday for many of us). They called when they realized they were going to be a bit late. They set up all the equipment to detect a leak and weren't initially finding anything un...

DESCRIPTION OF WORK
Hunted for leak in water line and capped off above ground faucet.

DESCRIPTION OF WORK
I have hired and recommended American Leak Detection on many different projects and will continue to do so. They find and fix problems without just tearing into things, the equipment they use is very helpfull.

Traditional plumbers and septic service companies did not seem to want my business locating the source of the sewer gas we were smelling. ALD found it within two hours, and provided a recommended course for remediating the problem.

We were very pleased.  They seemed very confident and sure of themselves.  Worked steadily and professionally.  Did not make a mess.  Showed us the steps that we needed to see.  Friendly and easy to talk to as they progressed through the steps of the job.

DESCRIPTION OF WORK
Detected a water leak under the concrete slab in one of our bathrooms.  Jackhammered out 4 tiles in the bathroom and the concrete slab to expose the leak.  It was where they thought it was..  They were able to cut out the small piece of pipe where the leak was and replace it.  The job took approximately 3 hours.  The leak was fixed.

After receiving a visit from the local water dept advising us of excessive water consumption(16,000 gallons), and, after conducting all the standard do-it-yourself tests to determine the leak, we called our home-owner warranty insurance company who referred us to their own "in-network" offering. We had not been able to find any obvious leak, ourselves, but had suspicion it stemmed from the house a...

DESCRIPTION OF WORK
Detected a leak in our T&P valve on the hot-water htr and discovered that the leak was caused by a failed pressure-valve on the input line. Both parts were replaced. Pressure was adjusted to appropriate pressures.