Siding
Pressure Washing
Windows
Gutters
Gutter Cleaning
Decks and Porches
Licensing
Insured
All statements concerning insurance, licenses, and bonds are informational only, and are self-reported. Since insurance, licenses and bonds can expire and can be cancelled, homeowners should always check such information for themselves. To find more licensing information for your state, visit our Find Licensing Requirements page.
Business Details 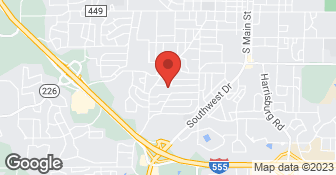 DESCRIPTION OF WORK
In April 2009 R & H sided my house and did an excellent job. Very satisfied with quality and speed of work. We spent around $5000. In approx Oct/Nov we noticed a hole in the siding. I called them in January to fix the hole, they made an appt and never showed, never called. I let a few weeks go by and called again, again, they did not keep appt no call. By June we noticed another hole in the siding. I made a total of 8 calls to both numbers listed in advertisement. One of the gentlemen told me they would be at my house on Friday. I asked if he would give me his word and he stated yes. Again, no show, no call. On August 6 I called again. I explained what was going on. He proceeded to explain that they had been very busy and I said I understood that but there was no excuse for making a commitment and not following through or not even calling. I told him I was going to contact someone about my dissatisfaction and he said there was no one I could call. I told him I had already contacted AngiesList but was waiting for them to make good. They made an appointment for two days later and they finally repaired my siding......but at twice the previously quoted price.

This is a large house; 40 ft. high on one side. They had a 5 man crew and it took 7 days to do the job. They missed the first start date, the weather delayed them on a current job. When they started-they stayed with it until completion and I was happy. This job was done in Dec.(30's-cold). It is now June (90's), and I had some expansion problems in a couple of places. I called them and they prompt...

DESCRIPTION OF WORK
They installed vinyl siding on house, aluminum on trim and facia, removed old gutters and reset, and installed some new gutters where I was missing some.