Sunrooms and Patio Enclosures
Windows
Insulation
Siding
General Remodeling
Roofing
Awnings
Licensing
Insured
All statements concerning insurance, licenses, and bonds are informational only, and are self-reported. Since insurance, licenses and bonds can expire and can be cancelled, homeowners should always check such information for themselves. To find more licensing information for your state, visit our Find Licensing Requirements page.
Business Details 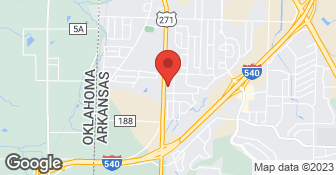 Welcome to ARCADIA REMODELING !, We are a full Service residential remodeling company based in Arkansas. We strive to provide all of our clients with "stress free" remodeling experience. Our professional staff will love to help you with your next home improvement project. Our pride is the quality of workmanship that we bring to our beloved clients Contact us today for a FREE estimate

Is your home as efficient as it should be? Are your energy bills higher than you would like? If so Schneider construction is here to help. We specialize in windows, insulation, roofing, doors, and other energy saving products. We've been in the business for over 30 years. For a free home energy audit or quote, give us a call. Family owned and operated. Financing available

Mr. Sawyer came to our home personally for the estimates.  We appreciated that.  Everything went smoothly.  If something was not to our liking, they fixed it immediately.  It took a long time due it raining almost every day for 2 months, but we were understanding and they were always there when they could be.  The gentlemen that worked on our home were all very nice and polite.  Mr. Sawyer said th...

DESCRIPTION OF WORK
Installed a few new windows and siding.

Started the project several months after they promised. When completed had to have them come back and fix several cosmetic items. Had to continuously call them to get response. They made some promises about the product that were not followed through. Finally just quit coming all together. The porch was fine in the end but took a lot to get them to stand up to what they promised.

DESCRIPTION OF WORK
They built a sun porch on our back deck, but they never showed up when they were supposed to, they always had excuses why they did not show up.

After reading this review I had to do some investigating to figure out who this person was. It took a while because this person didn't use her name or address that we had on file. I thought it was either very shady or that she had a bad day and wanted to blow off some steam at some one's expense. The reason that I say that is because the job was completed in May of 2011 to her satisfaction and thi...
A

Went very well, did my neighbor's soffit, back porch, and more.

Construction was done on a timely basis. Quality was excellent. Fullfilled all committments. Left the area clean. Only issue I had was with communications with work supervisor. Issues arose over when people would arrive to finish certain tasks. Most of these issues were over electrical tasks that were to be finished. I would be told a day and the workmen would not arrive, would call for specifics ...

DESCRIPTION OF WORK
Built a concrete foundation for room and patio for screened in room located just off my home structure. Room is 16x20 with polished concrete floor, screened walls, two doors, and light/fan fixtures. Foundation was expanded to create a small patio with a small porch to connect room to my house, Built a wooded pergola cover for the porch area, Work quality was excellent. Very pleased with the result. Attractive and well built. Lived up to all committments.

terrible response..i will Never use his company for anything.

DESCRIPTION OF WORK
terrible service on bid. he forgot all about us and i waited 2 months then had to call him for a bid amount. we did not use him because of the lack of interest from him.

I met with this homeowner in April of 2012 at his residence to discuss his interest in new windows and attic insulation. After inspecting his existing windows I informed him that his windows were fine and I advised him not to spend his money for that part of the project. He was very thankful and said it was nice dealing with an honest contractor. He wanted to install the insulation so I gave him a...