Landscaping
Tree Service
Fencing
Decorative Concrete
Pavers and Hardscaping
Leaf Removal
Lawn and Yard Work
Firewood
Concrete Driveways
Concrete Pouring and Repair
Licensing
Insured
All statements concerning insurance, licenses, and bonds are informational only, and are self-reported. Since insurance, licenses and bonds can expire and can be cancelled, homeowners should always check such information for themselves. To find more licensing information for your state, visit our Find Licensing Requirements page.
Business Details 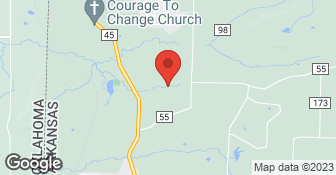 We are a small Landscaping and Tree company that has been in business for nearly 20 years....

Fast and reliable family owned and operated company. We specialize in fencing of all kinds, Decks, Garage, Sheds, Storage buildings.

Second Generation Family Owned & Operated. Jeremy Bixler estimates and performs all the work, which means the work will be completed on time & done right. I am well equipped to handle any size and any type of fence project. Estimates are always free.

DESCRIPTION OF WORK
They cleared thick brush in the back yard, cut down some trees, ground stumps, trimmed some trees and put up a cedar privacy fence. The crew was very nice and professional but their work was less than acceptable. The owner is misogynistic, unreliable and untrustworthy. I told him everything that I wanted done, he quoted me the price, I paid half up front and we shook hands. He "didn't remember" that I asked him to grind stumps so he accused me of trying to cheat him. He "didn't remember" that we agreed to deduct the cost of the salvageable fence posts and reluctantly took the cost off of my quoted balance. He didn't show up when he said he would and I had to call on multiple occasions to find out if he and his crew would come and when. He missed many stumps the first time that he came to grind and finally came to finish the job weeks later. I marked the remaining stumps with white spray paint and he still missed some the 2nd time. The fence was never properly connected to the neighbors fence and that was never fixed. I had to nag him to come and fix exposed nails on the neighbors' side of the fence so their children wouldn't get hurt. He cut corners because while putting up the slats, he used 2 nails to secure the tops and bottom and only 1 nail to secure the middle. He claimed to be "better" than the bigger companies but my neighbor, who used ACE for his fence, had his slats secured with 3 nails on the top and bottom and 2 nails in the middle. He didn't communicate with his crew very well so they set up the fence for two front gates when I told him I changed my mind and instead wanted one gate in the front and one in the back. He sprayed chemicals so that the brush wouldn't grow back and said that it would work for a year. The brush started growing back while they were still finishing up the fence. He was supposed to come an re-spray but didn't. Anytime I called with issues, he acted as if I was bothering him. He told me I was "too picky" for wanting things done correctly and as promised - in my opinion, I had $6000 reasons to be picky about work that I paid for in cash. He still had some remaining work to do and I even paid him $300 more than the quote to get his word that he would come back and finish things in a timely manner. We again shook hands but when it came time for him to hold up his end of the bargain - nothing got done. He never offered a refund for the add'l $300 that I paid to ensure that he would "tie up the loose ends" in a timely manner. I finally told him not to come back because he was rude, insulting and a liar. The only good thing I can say that the owner did do according to my instructions is that he never did come back. | |The crew told me that were underpaid and that the owner owned his own plane! In my opinion, the owner is looking to do the work as quickly and cheaply as possible without being accountable for the mediocre quality and poor service that he provides.

The team is a well-oiled machine, working together with precision and always concerned with safety. I couldn't ask for better results.

Promptly showed up after driving 30 minutes and gave a FREE estimate. Customer was taking other estimates and found a better price. I am not always going to be the most inexpensive contractor. I strive to give the best quality and promptness of service that is possible.
A

Express Tree was very punctual and professional and did a very good job.

Overall, the job looks pretty good.  If you're looking at it from the street, it's very pretty except for the sagging gate.

DESCRIPTION OF WORK
I had a cedar wood (board on board) fence contracted to be built by owner Ryan Watts.  It was to have a nice cap header with the trim board underneath for a nice finished look and three gates.  Throughout the process of building the fence I was home and supervised a big part of the installation.  When there was a question as to the quality and workmanship of the project, Mr. Watts would get really defensive and tell me I was just too picky...I have cracks between the boards in the fence which is what I was wanting to avoid when I decided to go with the board on board fence to begin with.  The fence is not very sturdy at it's highest section (over 6' tall).  When I questioned that he made the comment that he'd only ever had to rebuild a fence once and that was a tornado his it and if the wind blew it down he would rebuild it for free...This was only a verbal agreement but I said ok....Come to fine out, the support posts are only dug to 18" in depth.....From everything I'm hearing and reading, they should be a minimum of 24" to 36".  In the beginning, he measured the area for the materials he needed and I was told X amount and the total cost would be I think it was about $5200.  A few days before the completion of the fence, he came to me and said he didn't know what happened but he's short on materials (almost $2000 short) and that he must have measured wrong.  After telling him that I wasn't paying the difference that I told him in the beginning what my cap was for the project.  After going back and forth he said he couldn't eat $2000. in expenses, I agreed to pay half the expense.  I had to leave town at this point and the quality really went down hill.  The gates were nothing like what I told him I wanted in design.  One immediately began sagging to the point of not closing and he adjusted it but still not to the quality it should be.  It has since gotten so bad there is a two inch gap at the bottom and it hits at the top. The fence has a stair step design in the back going from a 6' to 4'.  The cap was supposed to be very finished looking with the cap having like a picture frame affect down the two drop down areas....These were left raw with no cap at all so it looks very ugly from the golf course looking toward the house.  This was mentioned to Mr. Watts and he said he'd take care of it when he came back in 30 days to fix anything after the wood had time to cure.....That was in September and I haven't heard from or seen him since.  I've sent emails to him to find out when he was going to come back and no response.

I did go back and adjust the sagging gate for the customer as I stated that I would do. This customer's fence has many picture's on our web site and we often get comment on how nice it looks.